Rabat - Germany felt Wednesday what Spain, Portugal, and Argentina narrowly escaped: the ire of the “underdogs,” who are growing tired of being deemed unfit to win the World Cup. 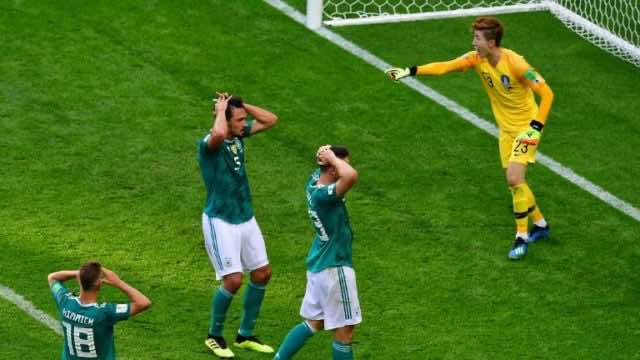 Rabat – Germany felt Wednesday what Spain, Portugal, and Argentina narrowly escaped: the ire of the “underdogs,” who are growing tired of being deemed unfit to win the World Cup.

Media outlets have duly reacted to “Germany’s dramatic end,” all agreeing that it was a footballing earthquake.

“The end of the world as we know it,” the Guardian called the game, hinting that the German national squad embodied an era and a mindset. For the Times Sports, June 27 will now symbolize the “Day the Germans just disappeared.”

“Bye-bye Germany,” Spanish sports outlet AS headlined, capturing one of the most telling images from the match: German right back Joshua Kimmich, midfielder Toni Kroos, and central defender Mats Hummels heavily walking off the pitch, crestfallen and hands on their heads. Not since 1938 had their country failed to reach the knockout stages.

In a post-match commentary that sounded more like a eulogy, prominent sports journalist Jonathan Wilson said: “This, then, is how the world ends, not with a bang but with a whimper. There are certain events so apocalyptic that it feels they cannot just happen. They should be signaled beneath thunderous skies as owls catch falcons and horses turn and eat themselves. At the very least there should be a sense of fury, of thwarted efforts, of energies exhausted.”

Wilson’s futuristic tone is barely an exaggeration. For many, the prospect of a German exit from the group stage could only be imagined in movies, horror comedy perhaps.

But not everyone was filled with empathy for a fallen giant, for other media were exultant, some for revenge’s sake and others for the pleasure of seeing others unhappy and unfortunate.

The Sun chose the German word Schadenfreude (pleasure derived from another person’s misfortune) to report on Germany’s “historical failure,” with a glimpse of Gareth Southgate, England’s coach, saying: “Let Germany defeat be a warning for England.”

As for Brazilian media, still harboring grudges for Brazil’s 7-1 humiliation at German hands in the 2014 World Cup semifinal, the sense of celebration was palpable: at least one serious contender is out, which should be good news for Brazil.

In the run-up to Germany’s historical humiliation against the South Koreans, the Germans were coming from a scintillating last-minute winner against Sweden in their second match.

The German press was rhapsodic after that last-minute win. “Some day our children will ask us: where were we when Toni Kroos curled the ball over Robin Olsen’s head?” German outlet Die Zeit said after the 2-1 win over Sweden. Bild, Germany’s most popular daily, was euphoric: “Against Sweden Germany was already clinically dead. Now it is brimming with strength.”

How will they recount the Russian adventure now that South Korea happened? What will they be telling their children about that fiasco?

“Speechless,” Bild titled its post-match analysis. “Speechless” was the exact same word the daily had used in June 2014 when Germany thrashed Brazil 7-1. In 2014, Bild was speechless because it was beaming with joy; it is now “speechless” because it is overwhelmed with grief.

“Over and out,” headlined Die Welt, next to a picture of a dejected Toni Kroos, whose last-minute goal against Sweden was not enough to salvage the German ship from sinking. Kroos’ goal had been touted a “spectacular salvation” after the Sweden game. Now, Die Welt seems to see in it a pale prelude to an equally spectacular devastation.

Frankfurter Allgemeine, a Frankfurt-based daily, was melodramatic. “Germany’s downfall,” it called the event. The newspaper contrasted images of Saturday’s elation against Sweden with those of yesterday’s heavy defeat. “Germany is back to the earth with a bump,” it said, suggesting that the hopeful jolt of last week’s victory clouded judgments about the team’s weaknesses.

“It is a big surprise, a huge disappointment, and it has left me and many of my compatriots feeling completely empty,” wrote German columnist Thomas Hitzlsperger.

“We didn’t deserve to progress,” Löw said, explaining that his men exhibited a sense of “highhandedness” from the outset in their Russian adventure.