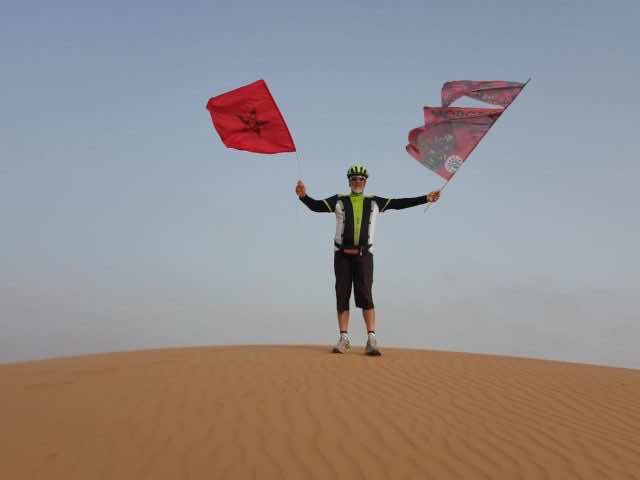 Rabat- Cycling is an ecological and elegant sport. Its limits are only determined by how far you want to move.

The definition of adventure can differ greatly from one person to another. Discovering new roads and riding in new areas is the principle of our definition. From the heart of human experience, our story captures the essence of a man with the passion for cycling; it is a story about tenacity, passion, persistence, hope, and success.

From Meknes to Mecca, a 58-year-old Moroccan cyclist Mohammed Rbouhate has challenged himself to complete the Hajj pilgrimage by bicycle.

At 16 years old, Rbouhate started this wonderful hobby. He fell down many times but day by day he continued to discover the sport and experience the freedom of moving on two wheels.

In his long life as a cyclist, Rbouhate has cycled thousands of miles; he passed through every city in Morocco, faced numerous dangerous circumstances, and met people from all different backgrounds and countries. These trips were unforgettable adventures.

After a long period of training and practicing, he has taken this sport under his wings and enjoyed remaining connected with the biking community. He was always so curious to hear about cyclists’ stories.

Traveling to Hajj on a bicycle 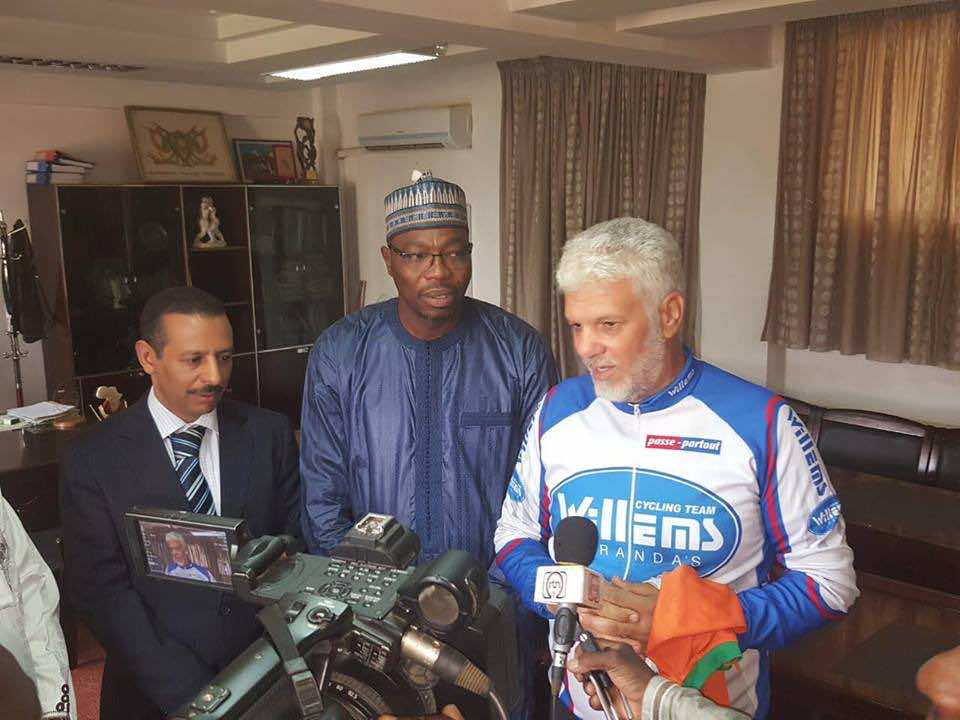 Rbouhate had always wished to make the pilgrimage, which is considered the fifth pillar of Islam. This spiritual trip is the realization of a long-held dream.

“After a long experience in cycling, I said to myself, ‘Why not experience new travel outside of Morocco?’ The first thing that I thought about is travelling on Hajj, knowing that I have already travelled to make the pilgrimage by car in 1988,” Rbouhate said.

In order to help fulfil this journey, Rbouhate followed all the procedures: he first contacted the Royal Court in order to receive approval for travelling; then, he contacted the Ministry of Foreign Affairs, the Ministry of the Interior, and the embassies of the countries he planned to pass through in addition to regional provinces and national security authorities in Meknes.

Although his family was initially against the idea of his journey, Rbouhate’s daughter has followed in his footsteps and now is a beginner cyclist.

“My wife and my children couldn’t accept the idea that I will be away for months, they were worried about the problems I may face during my travel, as well as the danger on roads,” Rbouhate said. “On the contrary I am not worried at all, because I believe deeply that Allah will protect me since I am doing all of this for the sake of his forgiveness.”

Rbouhate said that he did not receive any support from any region or prefecture except the national security.

“I feel sorry to say that when I arrived to Dakhla city, I asked the general secretary of the alderman of the region of Dakhla Oued Dahab to provide me with a shelter or a hotel where I can spend the night before I continue my journey, then he gave me only MAD 100 from his own money…whereas I was not begging him money but all I wanted was just a shelter.”

He also said that he asked for  support from the Ministry of Youth and Sport and the urban community of Meknes; however, he did not receive any answer.

The map of the journey 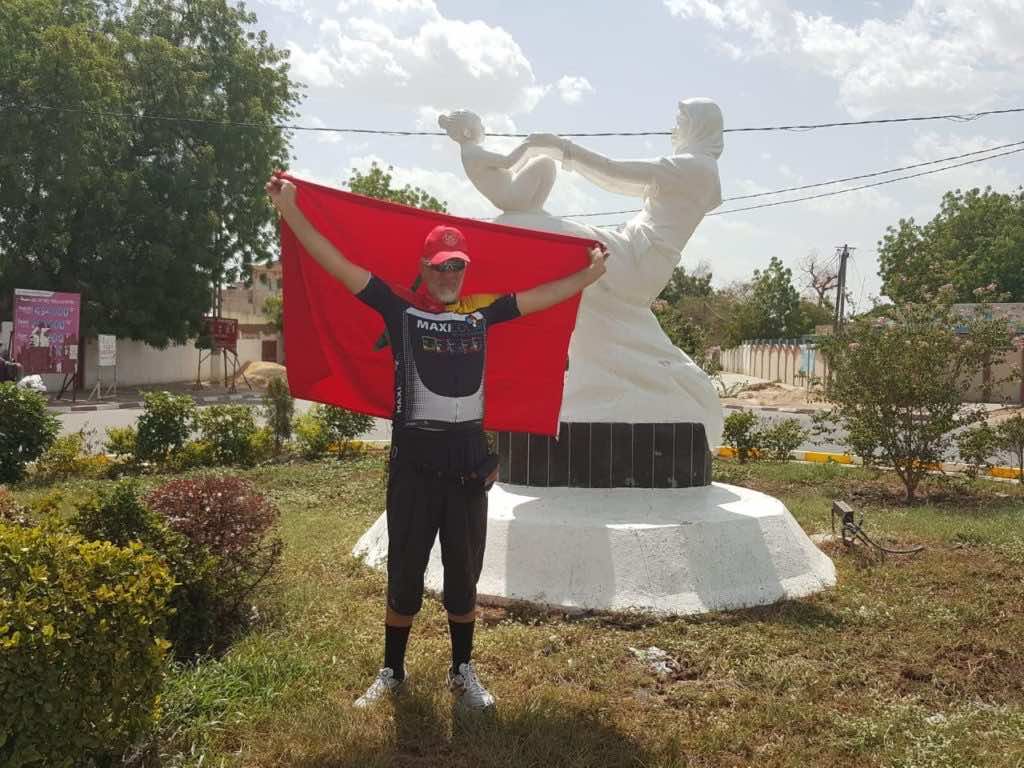 Rbouhate started from the city of Ismailia on April 1, 2018, passing through every Moroccan city. He arrived later in Mauritania, then  stopped in Bamako, the capital of Mali, to complete the first leg of his adventure. After a long ride, he arrived now to Sudan.

Upon completing the first portion in Bamako, he confirmed that he did not face any difficulties, as he had brought with him everything needed in case of a breakdown.

“It took me one month to study and explore the infrastructure, the nature and the weather of the countries I will be passing through,” he said.

Throughout the countries he crossed during his journey, he received support and encouragement from African people, especially Moroccans. Moroccan ambassadors of these countries offered him a warm reception along with other members of the Moroccan community.

“I have met a lot of people and I am often stopped by people who were happy to see me raising the flag of Morocco, as well as the ambassadors of Morocco in these African countries, such as Ambassador to Mali Hassan Naciri, Ambassador to Niger Ali Laachab, and Ambassador to Chad Abdellatif Roja as well as many others from the Arab community in Africa.”

Along his journey, Rbouhate faced various obstacles, from torrential rain to dry desert heat. He is still cycling through very rural areas, enduring the desert and temperatures that exceed 50 degrees Celsius, which sometimes led him to postpone his travel.

When Morocco World News asked Rbouhate about the country in which he faced the most difficulties, he answered, “Mauritania.” It is mostly covered by desert and has very few means of comfort, in contrast with Mali, Burkina Faso, and Niger.

The total distance he will pedal from Morocco to Saudi Arabia exceeds 30,000 kilometers. Rbouhate will use a ferry to cross the Red Sea and reach Saudi Arabia.

The goal of his journey is the most important on a pilgrimage; the path is only a means for achieving the goal. 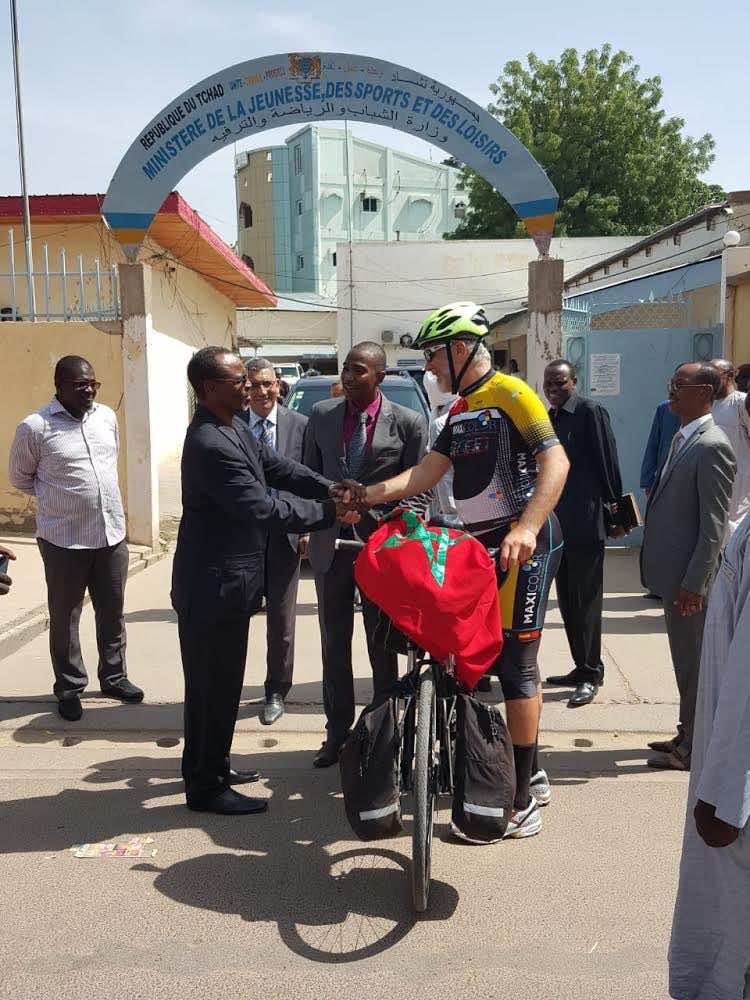 Reviving the traditions of pilgrimage 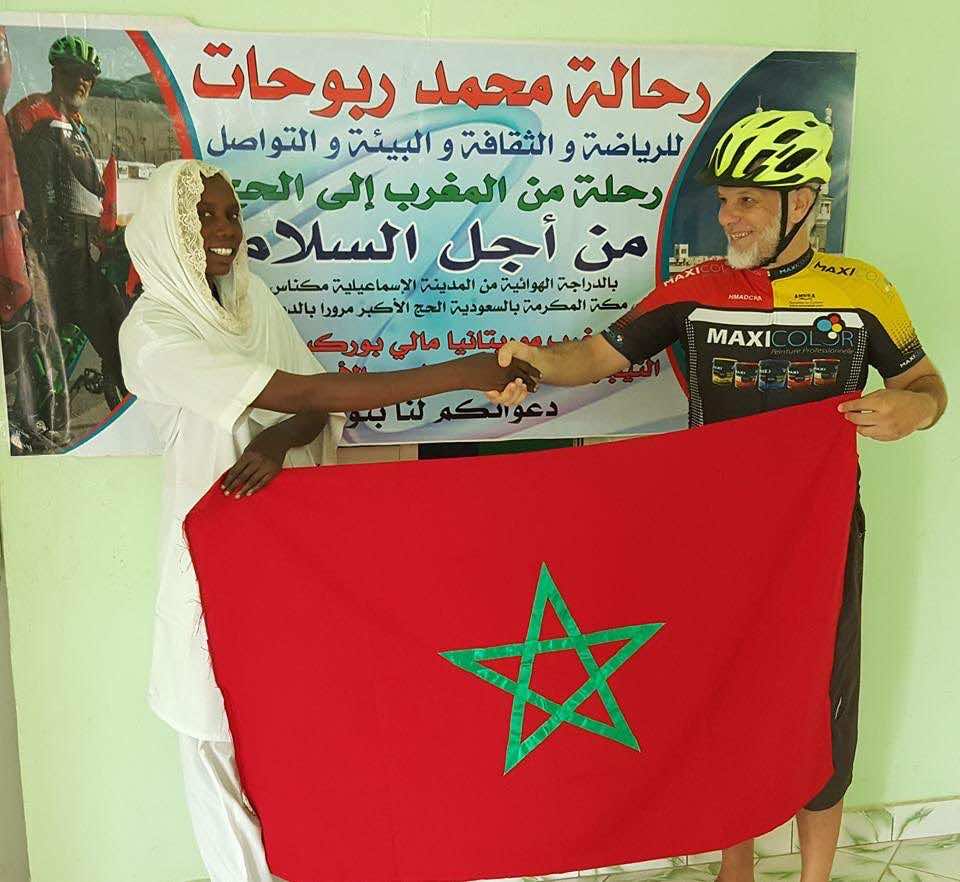 The Hajj is an annual Islamic pilgrimage to Mecca, the holiest city for Muslims. A mandatory religious duty for all adult Muslims who are physically and financially able to undertake the journey, the Hajj must be carried out at least once in a lifetime.

The idea of sacred travel runs deep in human religion, dating back to when Muslims would climb hilltops and deserts to be closer to God.

Using a bike to reach the holy city of Mecca evokes traditional methods of travel for Moroccans and Arabs around the world. Over one thousand years ago, when Islam appeared, Muslims making the pilgrimage used to walk or ride camels and horses thousands of kilometers to their destination.

“This journey is my life-changing experience which will test my determination and passion, and it is not supposed to be easy, and I am always carrying with me this verse of Qur’an as my principle during all my journey: “And whoever relies upon Allah, then he is sufficient for him. Indeed, Allah will accomplish his purpose” (Surah 65:3).

Over the past decades and before advances in air travel, people would write their testaments in case they never came back; nowadays, people can complete the Hajj in two weeks. 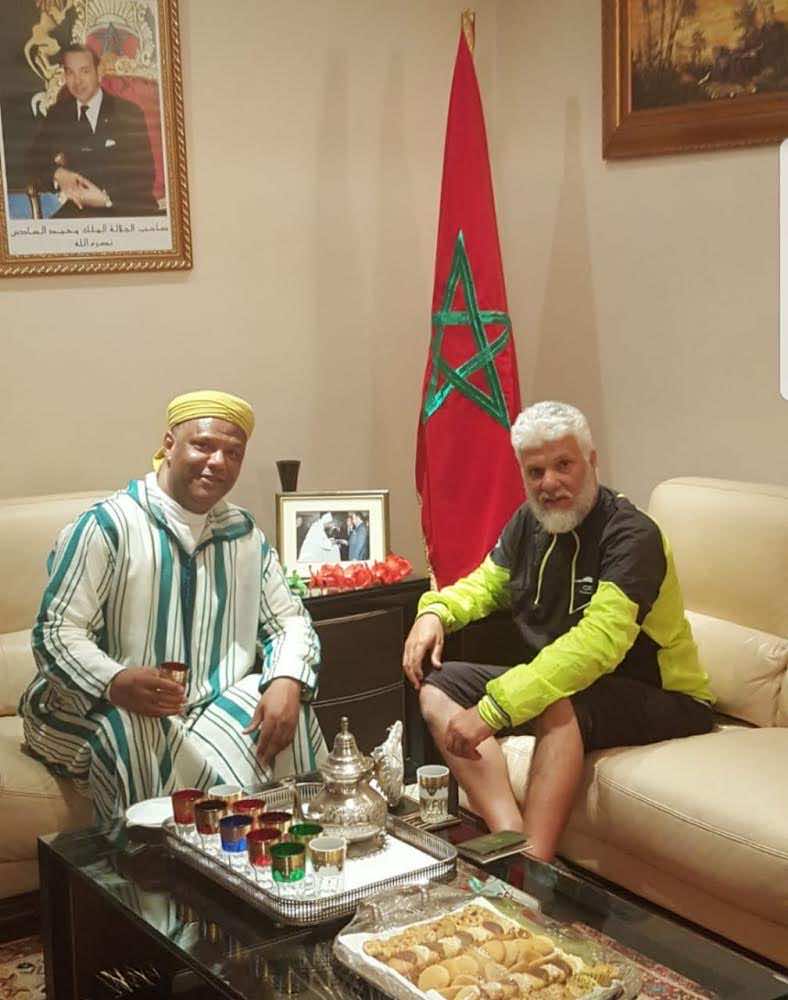 A journey for peace

“A Journey for Peace” is the slogan Rbhouhate chose to accompany him during his entire journey. This slogan reflects his desire to spread peace and tolerance in every country he passes by.

“I called it a journey for peace because everyone aspires to live in peace, and I am always wishing to spread it in all Arab and Islamic countries,” he said. “In addition to this, peace was the approach of our prophet, therefore, we should all follow this approach.”

The purpose of Rbouhate’s trip is to promote the values of Islam and to foster peace between countries, knowing that King Mohammed VI is emphasizing inter-African cooperation during his multiple visits to the different countries of this continent.

“African people always welcome me once they know that I am coming from Morocco. Their love towards Morocco generally and our King specifically is very clear in their warm reception.”

Rbouhate’s deep wish is to make this journey mark his lifetime achievement, something that will make his children and his grandchildren always feel proud when they talk about it. 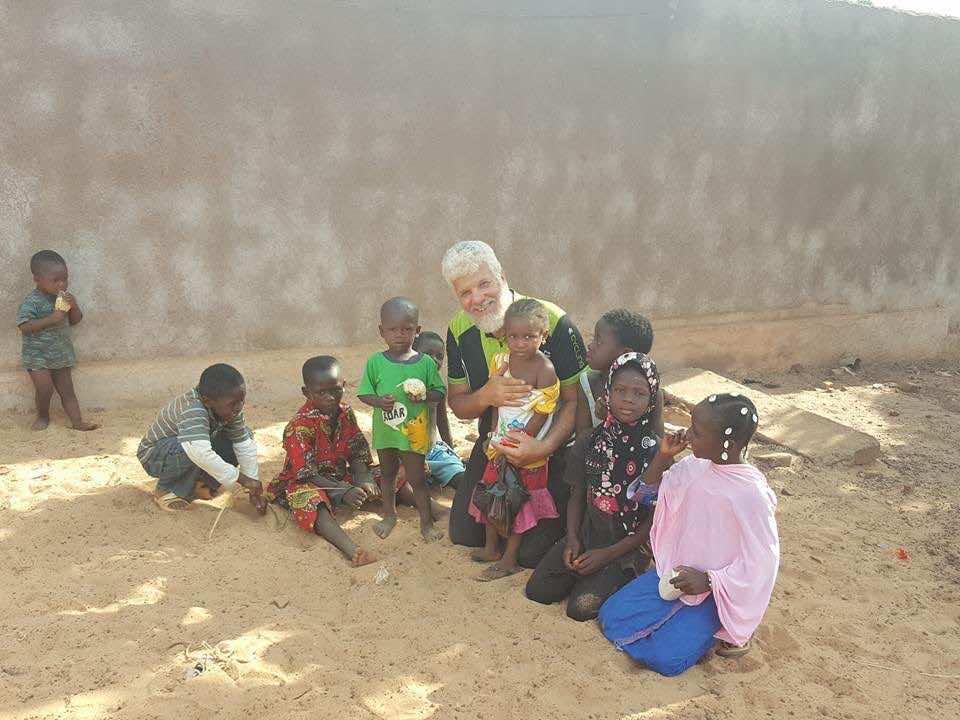 The most common effect of a pilgrimage is unity and social cooperation, which leads to understanding among nations. The most important factor behind understanding is the rightful teachings of a religion which bridges the gaps, brings hearts together, creates a link between east and west, and units the blacks and whites, Arabs and non-Arabs.

“The world is a book, and those who do not travel read only one page” – Saint Augustine. 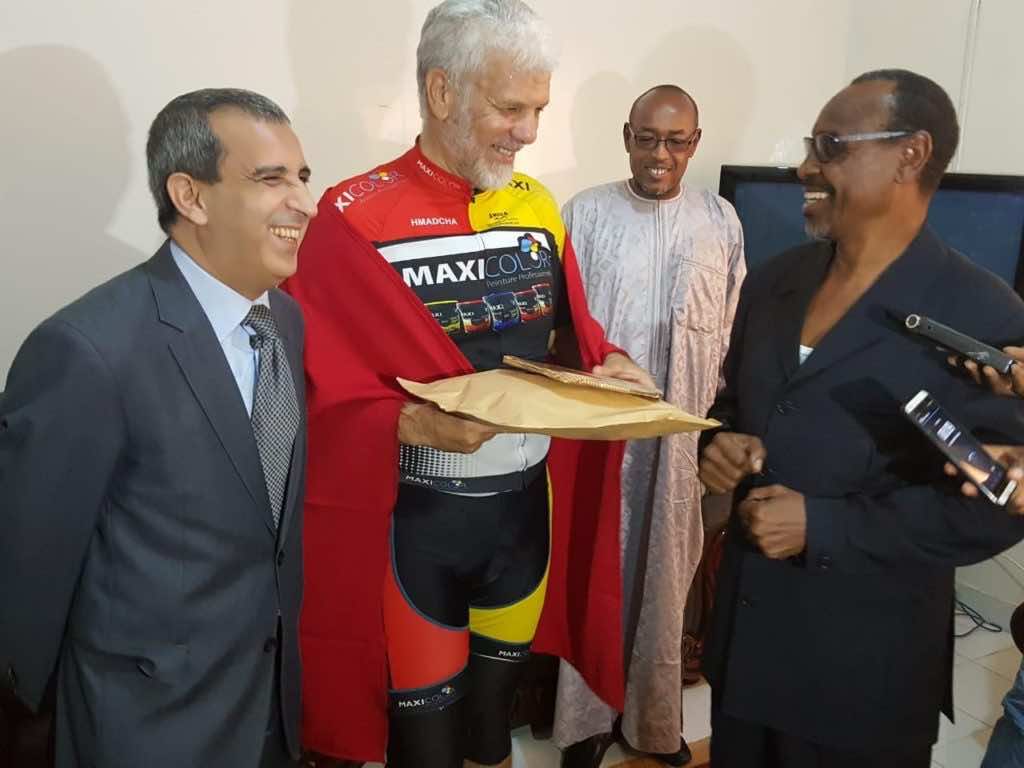