Rabat - Ahead of a Wednesday summit in Brussel, the diplomatic rift between Washington and its strategic European allies, especially NATO members, is leaving many European politicians wondering whether the 70-year-old military alliance can survive Trump’s isolationism. 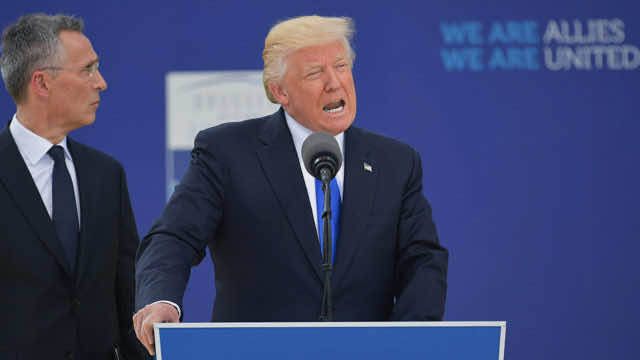 Rabat – Ahead of a Wednesday summit in Brussel, the diplomatic rift between Washington and its strategic European allies, especially NATO members, is leaving many European politicians wondering whether the 70-year-old military alliance can survive Trump’s isolationism.

Trump’s anti-Europe stance on tariffs and trade, together with his bold “America First” rhetoric, is threatening to disrupt the North Atlantic Treaty Organization’s (NATO) established reputation for “consensus and solidarity,” the Guardian noted yesterday.

Speaking to a crowd of supporters on Thursday last week, Donald Trump said that he would tell Europe that America can no longer afford to pay and provide for their security. “I’ll tell NATO you got to start paying your bills,” President Trump said. Direct and indirect investment combined, the US covers about 76 percent of the alliance’s expanses.

The president then recounted a conversation he had with German Chancellor Angela Merkel, when he supposedly told Merkel that America was seriously considering withdrawing its military personnel from Germany, as the US does not benefit from keeping military bases in the European country.

NATO will not ‘split asunder’

But Trump’s overt criticism of Europe is mitigated by American diplomats and strategists, most of whom continue to support American involvement in the collectivist agenda of NATO and similar multinational organizations.

The US NATO ambassador, Kay Bailey, said in a press briefing last week that America is committed to firm and strong cooperation with NATO allies to deal with common security challenges, including Russian interventions in Ukrainian affairs and its meddling in the UK.

For optimists like Ambassador Bailey, Trump will be survived by America’s alliances.

“The notion that NATO is going to split asunder I think is absurd,” said Professor Daniel Drezner of Tufts University. Drezner explained that NATO is a combination of countries and even continents that have so much in common that a single man cannot lead to its collapse.

But even so, the pessimist camp believes that Trump’s anti-globalization and isolationist rhetoric is not much of an exception. They argue that Trump’s ideas are part of a growing tendency in American public life, where many people feel tired of America having to resolve the world’s problems while it has many of its own that have not been solved in years.

A senior European official told the Guardian that, for all his brutal and undiplomatic take on foreign policy, Trump’s rhetoric is far from a one-off. The source explained that President Obama tried to pull America’s focus away from Europe, although in a more diplomatic way.

“The presidents have understood the fatigue of the Americans towards foreign involvement in their own different ways.”

Russia’s assertive regional and global role under President Putin has increased the perception of Russia as an “existential threat” for European countries, especially in the UK and France where there have been recent reports of Russian meddling in domestic affairs.

Many in Europe think that the declining solidarity and collectivist commitment within NATO will damage European security.

Disunity and disagreements within the alliance “would weaken [Europe] and provide new opportunities for countries like Russia to take advantage of that,” Erik Brattberg, director or the Carnegie Endowment Europe’s program said.

Europe’s world—in terms of security—would be “shattered” if things do not return to normal when Trump leaves the presidency, the senior European official further said.

Whatever America does is the most defining contributor—both in funds and military personnel—to the functioning of the 70-year-old security alliance. Leon Panetta, a former US defense secretary, said, “Europeans are scared to death” the US will bring its troops home from Europe in the face of mounting threats from Russia.

“They are scared to death. They are worried about a very unpredictable president of the United States. They are increasingly worried he is going to do things not based on what’s in their best interest, but solely on his vision of ‘America First,’” he said.