Rabat- After they were caught on camera drifting to sleep while in Parliament, some MPs have been caught again but this time checking and scrolling on their mobile phones. 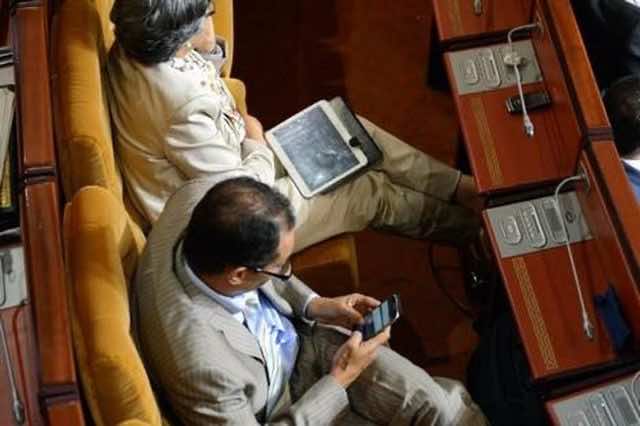 By
Tarek Bazza
-
Tarek Bazza is a journalist at Morocco World News with Master’s degree in Translation from King Fahd School of Translation in Tangier.
Jul 12, 2018
Spread the love

Rabat- After they were caught on camera drifting to sleep while in Parliament, some MPs have been caught again but this time checking and scrolling on their mobile phones.

Rafiaa El Manssouri, MP of the Istiqlal party team and member of the Finance and Economic Development committee, was speaking at the parliament while many MPs appeared to be neglecting her speech. Her talk would normally receive attention since it concerns important economic and social issues.

“It is true that we are an independent national opposition in the government. We were part of the previous government, we backed the reform.” The MP continued her speech, wondering, “What is the point of public policies if the citizen was not the center of its attention?” while the focus of some of her MP colleagues’ attention was their phones and tablets.

El Manssouri was talking about issues related to governmental national support, IMF support, and social sectors, during a session of the House of Representatives discussing the exploration mission report on fuel prices.

Although El Manssouri spoke fervently on the government’s unwise investment of the financial support it has received from the International Monetary Fund (IMF), her talk was clearly not of  importance to some MPs.

“We are not against the fact that the country receives [external] financial support, but the bad thing is that the country, as “a good student” of IMF, received MAD 35 billion and used it in its budgets balance, instead of investing this fund in social sectors, including education and health.”

It seems like the deputies of the nation are more concerned by their phones than the issues of the country.

“It is time for the government, if it fails in this issue, to come courageously and daringly, and say: ‘I apologize, I couldn’t do it,’ and return back to indexation,” El Manssouri concluded her speech.

Moreover, other MPs were seen talking on their phone inside the Parliament while the voice of Aziz Rabbah, Minister of Energy, Mines, and Sustainable Development, spoke about energy issues after showing a pertinent video clip.

It seems like the Parliament has become a cyber cafe for MPs to leisurely scroll on their social media accounts. The controversial video sparked outrage and received severe criticism by Moroccans on social media and Youtube.

MPs’ Wages to Be Deducted for Each Missed Parliamentary Session