Washington D.C - “This journey of creating mobile apps started a year ago when I started working here in Morocco with Moroccans friends for seven months and we failed terribly,” stated winner and CEO of Weego, Saad Jittou. 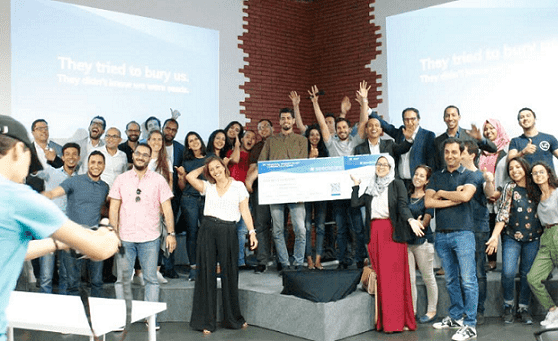 By
Lameese Madi
-
Lameese Madi is a correspondent based in Kansas City, Kansas.
Jul 14, 2018
Spread the love

Washington D.C – “This journey of creating mobile apps started a year ago when I started working here in Morocco with Moroccans friends for seven months and we failed terribly,” stated winner and CEO of Weego, Saad Jittou.

After struggling with the startup, 23-year-old Jittou was selected as the winner of Seedstar 2018 and will be representing Morocco on the international stage. Jittou is the CEO and founder of Weego, an app that allows individuals to move easily by utilizing public transportation. The young entrepreneur has collaborated and launched other projects such as Pikala Bikes and his own accessories brand.

Starting with a group of young entrepreneurs, the Moroccan team built the app from the ground up and launched it in Dakar, Senegal. Weego was then picked up by the Ministry of Transportation in Morocco. From there, they attended Viva Tech Paris, where a lot of major corporations noticed and became interested in their work. After two months, the team moved their app service into the Moroccan Market.

Pitching with seven other major startups in La Factory, Weego won first place to continue to Regionals in Beirut, where they will be supported by SEEDSTAR.

Weego was started because of a need for communication between the public transportation companies and the people waiting to use their services.

“I was thinking about how to solve a big problem, which is waiting for long hours and in complete uncertainty for the buses. It’s a big problem. Working women who work far from the center of the city where they work in factories and they will wait for the bus for long amounts of time in far zones. They leave at 7 PM at night and they feel unsafe. [Weego] is a solution where they can wait in the factory and be notified when the buses arrive,” said Jittou.

This offers security and comfort for workers to relieve stress and offers an opportunity to use time more efficiently.

“I did not expect to win. I am the youngest candidate here. It’s a lot to take in this stage,” exclaimed Jittou.

Regionals will be in November in Beirut, where teams compete for the national stage in April 2019 in Switzerland.