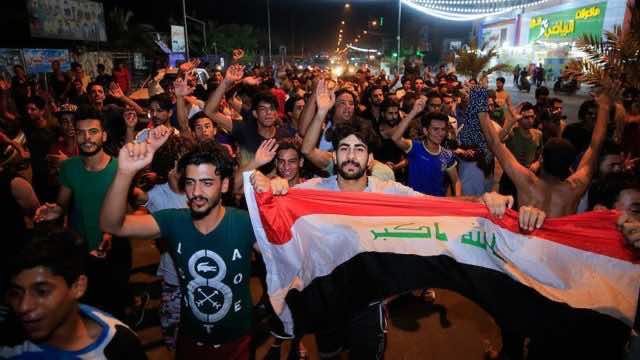 Rabat – Protests erupted across Iraq after security forces opened fire and killed a demonstrator during the July 8 youth protest in Basra. Today, the violent clashes between police and protesters entered its eighth consecutive day with three fatalities and over 100 injured.

Initially, youth gathered in Basra to voice discontent over the lack of basic necessities like employment and electricity; after police shot a young activist, demonstrations spread across the nation with slogans pronouncing, “The people want to overthrow the regime,” and “Iran, out out! Baghdad is free!”

In Basra, clashes between demonstrators and security forces resulted in 50 people injured—mostly protesters—after a failed attempt to storm the governor’s headquarters. Anti-riot police fired tear gas and water cannons at demonstrators to quell the effort.

One man in his mid-thirties, unemployed for three years, pledged, “I will not leave my place here until I get all my rights. The government lies to us; they always give us such promises and we get nothing.”

In response to the continual demonstrations, Prime Minister Haider al-Abadi promised new funding and investment in Basra totalling USD $3 billion. The dedicated capital is intended to restore housing and schools in the oil-rich but neglected Shiite heartland.

In addition, a six-minister committee formed in response to the protests promised to launch a water-allocation project and create jobs for those inhabiting areas surrounding the oil fields.

One activist responded to the governmental promises as “anesthetization to the residents of Basra.” He demanded greater power given from Baghdad to develop a fresh local government in that region.

“Every year, they give the same promises, and nothing happened on the ground.”

In Muthana, a province bordering Basra, demonstrators gathered in the hundreds to torch sections of the governor’s headquarters and set fire to offices run by Badr, an Iranian-backed political party. Guards opened fire in response and wounded multiple protesters.

The prime minister held a meeting Sunday with security and intelligence leaders in Baghdad after his visit to Basra. A statement from his office accused “infiltrators” of feeding on “peaceful protests to attack public and private property” and asserted, “Our forces will take all the necessary measures to counter those people.”

“When the state responds to citizens’ demands, it is a strength, not a weakness,” Abadi said.

He ordered security forces to avoid using live fire against unarmed protesters but stated, “Iraqis do not accept chaos, assaults on the security forces, state and private property, and those who do this are vandals who exploit the demands of citizens to cause harm.”

The Al Najaf International Airport remains closed until further notice, and the second consecutive day without internet service across the country has left some citizens without access to the outside world.

Unemployment, a major catalyst for the original July 8 protest, remains a focal point during demonstrations. Official numbers estimate that 11 percent of Iraqi people remain unemployed and youth joblessness hovers at twice that number.

Eighty-nine percent of Iraqi exports derive from the oil sector; however, the department creates only one percent of jobs. Foreigners fill the majority of oil-related jobs.

The protests follow a three-year war against the Islamic State terrorist group, a conflict that has torn Iraq apart and devastated its infrastructure. Iraq’s government assesses the damage at USD $88 billion necessary for reconstruction.

Some consider the demonstrations a continuance of those launched July 16, 2015, when a young man died at the hands of police during a protest. In the following years, sporadic protests calling for governmental reform have erupted in various Iraqi cities. The current protests share themes with past demonstrations, including discontent with corruption and lack of basic services.