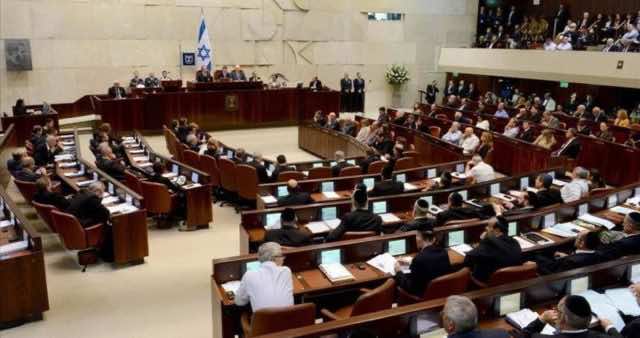 Rabat – A law passed early today, Thursday, in Israel’s parliament which establishes the nation as a principally Jewish state.

The law sparked controversy over its provisions to elevate Hebrew as the official state language, recognize Jerusalem as Israel’s capital, and grant Jews self-determination within Israel.

Discussed and redrafted since its introduction in 2011, the bill became Israel’s 14th Basic Law in a 62-55 vote with two abstentions. It comprises 11 provisions, including preservation of Jewish heritage and recognition of Israel as the “historic homeland of the Jewish people, who have the unique right to self-determination.”

Although once considered equal to Hebrew before the law, the “nation state” bill downgrades the Arabic language to “special status” in Israel.

The bill’s official name is “Israel as the Nation State of the Jewish People.”

A “defining moment,” but in what way?

Israeli Prime Minister Benjamin Netanyahu declared the “defining moment” as a fulfillment of “the founding principle of our existence.”

“In the Middle East, only Israel respects [rights]. This is our country, the Jewish state. In recent years there have been those who have tried to undermine that and question the principles of our existence.”

“Today we made it into law: This is the country, the language, the anthem and flag. Long live the State of Israel.”

Arab members of parliament Ahmad Tibi and Ayeda Touma-Souliman accused the prime minister of passing “an apartheid law, a racist law.” Tibi further stated that the bill’s passage represents a “death of democracy” in Israel.

Multiple MPs demonstrated against the decision both during debates and after the official decision. Some members ripped up the bill with their hands while Joint List chairman Ayman Odeh lifted a black flag in protest during the debate.

“As [the 1956 massacre] in Kafr Qassem was a blatantly illegal order, with a black flag over it, so is a black flag hoisted over this evil law,” Odeh said.

“Today, I will have to tell my children, along with all the children of Palestinian Arab towns in the country, that the state has declared that it does not want us here. It has… told us that we will always be second-class citizens.”

Of Israel’s 9 million population, Israeli Arabs measure approximately 21 percent; most of them identify as, or stand in solidarity with, Palestinians. Another 74 percent of Israel is composed of Jews; the final 5 percent, classified as “others” include Christian and Muslim non-Arabs.

Since the mid-20th century, the continued Israeli-Palestinian conflict centers on the geopolitical partitioning of a highly-contested plot of land between Egypt and Jordan. Peace processes hinge on the manner in which each body recognizes the other.

For years, Netanyahu has stressed the necessity for Palestinians to consider Israel a Jewish state before any compromise between the two bodies can be reached.

Palestinian President Mahmoud Abbas stated in 2011 that he recognizes Israel’s right to exist and hopes that sentiment is answered by Israel “recognizing the Palestinian state on the borders of the land occupied in 1967.”

In a 2014 speech, Abbas addressed the proposed nation-state law under discussion and charged that Israel, instead of working towards peace, was attempting to establish an apartheid state.

A legal move in the form of a nation-state law indicates a significant event in Israeli-Palestinian relations.

Israelis against the bill gathered Saturday to protest in Tel Aviv. Demonstrating citizens expressed discontent over the nation-state law, a sentiment shared by certain Jewish organizations in Israel and the US.

“Its only purpose is to send a message to the Arab community, the LGBT community and other minorities in Israel, that they are not and never will be equal citizens.”

“Two months ago we celebrated the 70th anniversary of the Israeli Declaration of Independence, where it was written that the State of Israel ‘will ensure complete equality of social and political rights to all its inhabitants irrespective of religion, race or gender.’ Today Netanyahu’s government is trying to ignore those words and the values that they represent.”

“The nation-state law is a colonial law with features of apartheid, which is prohibited by international law because it contradicts the international treaty that bans apartheid crimes. It creates various avenues for segregation in land and housing and incentives based on the principle of ‘advancing Jewish settlement’ both in civil life and in obtaining citizenship based on the law of return and in language and in cultural rights in the name of self-definition.”

Expressing disappointment in the bill, the American Jewish Committee stated that the legislation “puts at risk the commitment of Israel’s founders to build a country that is both Jewish and democratic.”

Eugene Kontorovich, international law director for conservative think tank Kohelet Policy Forum, defended the bill as “similar to provisions in many Western democratic constitutions, which provide for an official language and national character that reflects the majority of the population.”

Some segments considered too discriminatory were dropped from the bill or softened.

One clause, significantly altered four days before the vote, would have sanctioned Jewish-only communities, a provision slammed by politicians as promoting segregation. The news version of the stipulation places “national value on development of Jewish settlement” and states that the government will “act to encourage and promote its establishment and consolidation.”

As a Basic Law, the legislation now holds constitution-like status in Israel.