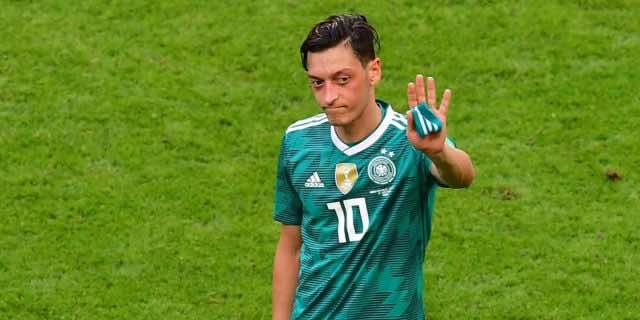 The 29-year-old midfielder for Arsenal announced the news on his Twitter account. He wrote, “It is with a heavy heart and after much consideration that because of recent events, I will no longer be playing for Germany at international level whilst I have this feeling of racism and disrespect.”

The past couple of weeks have given me time to reflect, and time to think over the events of the last few months. Consequently, I want to share my thoughts and feelings about what has happened. pic.twitter.com/WpWrlHxx74

The decision came after he was harshly criticized for appearing in a picture with Turkish President Recep Tayyip Erdogan at an event in May, during Turkish presidential campaign.

The Turkish-German football player was also targeted by angry fans who lashed out at him after Germany’s shocking loss to South Korea which resulted in an early exit from the 2018 World Cup.

Ozil received hate mail and threats blaming him for the loss. In the emails he said people called him a “Turkish pig,” among other insulting names. “I am German when we win, but I am an immigrant when we lose,” Ozil said, adding that the reactions represent a Germany of which he is no longer proud.

“Is it because it is Turkey? Is it because I’m a Muslim? I think here lies an important issue,” said Ozil, questioning why his other dual-heritage teammates have not experienced the same treatment.

Talking about his meeting with the Turkish president before the 2018 World Cup in Russia, he assured fans that his gesture had “no political intention.”

“Like many people, my ancestral roots span more than one country. I certainly grew up in Germany, but my family history has its roots firmly in Turkey. I have two hearts, a German and a Turkish.”

Following his statement, many Turkish ministers applauded Ozil’s decision to leave the Mannschaft.

“I congratulate Mesut Ozil who, on leaving the German national team, scored the best goal against fascism,” tweeted Abdulhamit Gul, the minister of justice.

Racism in the football world

“If I score I’m French but if I don’t I’m Arab,” said France’s Karim Benzema in an interview with French outlet So Foot in 2011. Bi-national football players have struggled for decades over racism, being targeted by fans, coaches, and teammates.

Recently, France players Paul Pogba, Ousmane Dembele, and n’Golo Kante were subjected to racist abuse by Russians during the World Cup competition in their side’s 3-1 win over the competition’s host.

Last year, the captain of the national team, Mehdi Benatia, was the subject of an offensive insult when called “Moroccan sh*t” on live television in Italy.

Morocco’s Atlas Lion Abdeslam Ouaddou experienced it in 2010. During a game with Valencienne against FC Metz, Ouaddou was the victim of racist verbal attacks by a fan who insulted him for 45 minutes at the Stade Saint-Symphorien.

In April 2009, Nigerian-Belgian Oguchi Onyewu accused his Anderlecht teammate Jelle Van Damme of having treated him three times as a “dirty monkey.” Subsequently, he lodged a complaint against Van Damme to put an end to the racism.

In November 2007, Congolese-Belgian Zola Matumona left FC Brussels following racist remarks by club president Johan Vermeersch. According to the player’s lawyer, Vermeersch had said to Matumona he “was no longer in his country and had to forget about trees and bananas” in the presence of the staff and other players.

In 2006, Cameroonian Samuel Eto’o, then at FC Barcelona, where he was one of the most prolific attackers on the planet, was the victim of monkey cries from an audience member who had already taken a hit at him the previous season. He decided to leave the field, but was dissuaded by his coach Frank Rijkaard.