Rabat - Moroccan culture was showcased in all its richness and diversity, Sunday, June 22, at the National Museum of Australia in Canberra, as part of the cultural event "The Souq - a festival of culture." 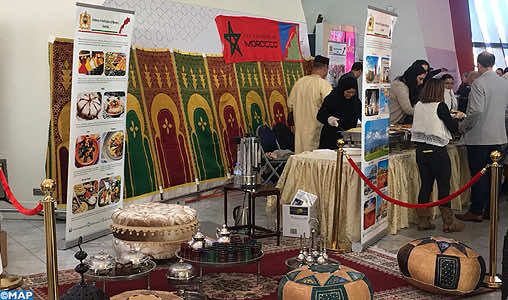 Rabat – Moroccan culture was showcased in all its richness and diversity, Sunday, June 22, at the National Museum of Australia in Canberra, as part of the cultural event “The Souq – a festival of culture.”

Morocco’s embassy in Australia had dedicated, at the entrance of the museum, a Moroccan stand where visitors discovered the different facets of the Kingdom’s culture, especially crafts, music, and gastronomy.

Visitors could enjoy various traditional dishes and appreciated the rich gastronomy of the kingdom with its ingredients, such as saffron, olives, candied lemons, olive oil, and aromatic herbs.

Moroccan craftsmanship also had an important place in the Moroccan stand with different items that reflected the expertise of Moroccan artisans, bringing to the Australian capital the atmosphere and smell of a real Moroccan souk.

“This event is part of efforts to promote the rich and diverse Moroccan culture in Australia, a country known for its cultural mixing,” said Morocco’s ambassador to Canberra, Karim Medrek, in a statement to the MAP.

This year, the embassy of the Kingdom has opted for a diversified cultural program to make the Kingdom and the pluralism of the Moroccan culture known to Australians. According to Medrek, Morocco has a good reputation among Australians, many of whom visit the North African country.

The arts and culture event was organized by the National Museum of Australia and was enhanced with exhibitions, folk art shows, and craft workshops. Several folklore troupes highlighting the heritage of Islamic countries also participated in the event.