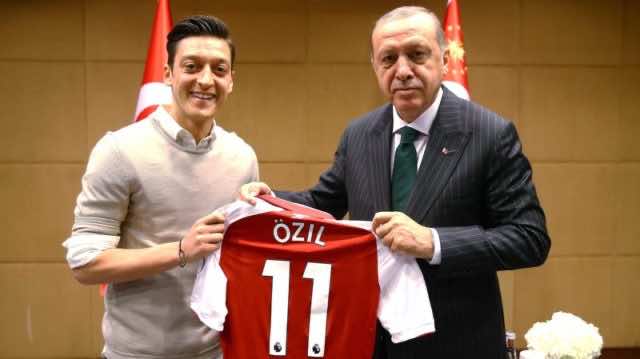 In the Turkish press on Tuesday, President Recep Tayyip Erdogan revealed that he called Mesut Ozil to greet him after his choice to leave the German team.

“I spoke with him yesterday [Monday]. They can’t digest the fact that he posed for a picture with me. I support the statements of Mesut Özil,” said the Turkish president.

“Such a racist treatment towards a young man who has given his all to the German national team for his religious beliefs is unacceptable.”

On Sunday, the 29-year-old midfielder for Arsenal announced that he is leaving the Mannschaft, the German team, after he was harshly insulted with racist words over his picture with Erdogan and Germany’s shocking loss to South Korea which resulted in an early exit from the 2018 World Cup.

After the decision of the German-Turkish football player, the Turkish government expressed support for the native of Gelsenkirchen, north-west Germany. The Turkish Minister of Justice, Abdulhamit Gul, praised on Twitter the “goal” of the playmaker “against the virus of fascism.”

For the past two years, Turkey and Germany have had particularly strained relations. Ankara has denounced Berlin’s accusations of Turkey’s repressive drift after the 2016 attempted coup against Erdogan. The two countries have, however, been trying to ease tensions for several months now.

Speaking about Ozil’s shocking departure, his coach Joachim Low said through his agent that he had no clue that his player was leaving. Low was on holiday in Sardinia when he learned on the internet the statements of the 2014 World Cup champion.