Rabat - Hundreds of migrants have illegally crossed the border from Morocco to Spain’s North African enclave, Ceuta, this morning. 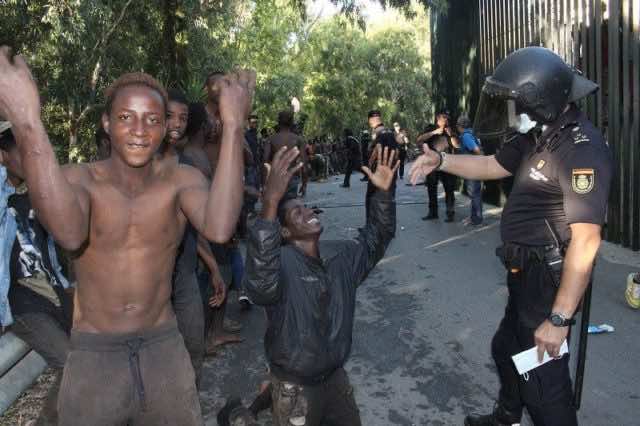 Rabat – Hundreds of migrants have illegally crossed the border from Morocco to Spain’s North African enclave, Ceuta, this morning.

With numbers estimated between 400 and 600, the migrants arrived with “unprecedented violence,” according to the police. So far, 11 migrants and 4 civil guards have been transferred to the University Hospital of Ceuta.

The migrants used quicklime, feces, and flamethrowers against the security forces to cause respiratory disorders, conjunctivitis, blows, wounds, and burns.

In order to jump the fence, migrants picked the weakest point of the border, a section with blind spots. The border is double-fenced with a length of 8.4 kilometers and a height of six meters. To break the fence, migrants used shears and threw quicklime at security agents.

According to El Pueblo de Ceuta, this jump could be the biggest in the history of the city.

The Red Cross is working with the migrants, now at the Temporary Immigrant Stay Center (CETI). The Red Cross Immigration Emergency Response Team (ERIE) has so far treated 390 foreigners. The maximum capacity for CETI is 520 people, but it currently holds 600.

The International Organization for Migration stated that as of June 27, almost 22,000 migrants have come to Spain.

Last September, former Minister of the Interior of Spain Juan Ignacio Zoido stated there had been nine successful mass jumps in 2017 with a total of almost 9,000 immigrants entering the territory, compared to 613 in 2016.

Moroccan Minister of Agriculture Aziz Akhannouch stated that the agreement between Morocco and the European Union regarding agriculture and fisheries will continue the influx of migrants.

“How do [Europeans] want us to do the job of blocking African and Moroccan emigration if Europe does not want to work with us? The problem of emigration is very expensive for Morocco and Europe must appreciate it at its rightful value,” Akhannouch said.