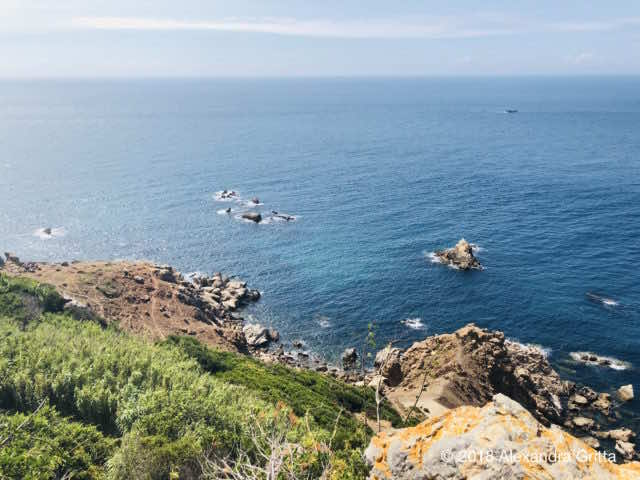 Rabat- Tangier, nestled in the Strait of Gibraltar, is nicknamed the “Gateway to Africa” for its proximity to Europe. The city is a popular destination for cruise ships and is foremost a port city. It is connected to 174 ports from 74 countries on 5 different continents.

One of Tangier’s appeals is that there are ferry rides from Morocco to Spain. In fact, you can see the edge of Spain from Tangier’s Cape Spartel, a promontory (and popular viewing point) located 300 meters above sea level.

Tangier experienced a period of relative touristic obscurity after World War II compared to other areas of Morocco, but has been drawing more and more tourism. The increase is partly due to the appeal of its primary attraction—the Caves of Hercules, situated just 14 kilometers west of the city. King Mohammed VI has also been personally promoting the region as a tourist destination.

Tangier has undergone increasing modernization, including the construction of the business district “Tangier City Center” and a new football stadium. In August, it will also host Brave 14, the first global mixed martial arts (MMA) event ever to take place in Africa and the final Spanish Super Cup football match.

A new luxury port has been built adjoining the ancient medina (old city), which has also recently been restored. The port is an area more wealthy visitors can dock their boats at while touring the Mediterranean Sea. Additionally, palm trees have been planted in many of Tangier’s main streets in an attempt to decorate the city.

Over the years, the city has been a link between various cultures. In the past, Tangier was both an Amazigh (Berber) town and a Phoenician trading center. It also passed through the hands of the Romans, Vandals, Visigoths, and the Umayyad Empire. A Carthaginian Empire settlement dating back to the 5th century B.C. called “Tingis” by the Greeks inspired Tangier’s current name.

As of 1923, colonial powers considered Tangier a city of “international status” and it became a landing for diplomats, businessmen, and spies. It was also a mecca for gamblers and an “El Dorado” for the upper class.

Essentially, Tangier was not under the jurisdiction of Morocco for a long period of time. From 1923-1928 it was deemed a “neutral demilitarized zone” under the joint administration of Spain, France, and the United Kingdom. Beginning in 1928, it also was administered by Portugal, Italy, and Belgium, and in 1929, the Netherlands joined on. The United States followed during World War II, using Tangier as its operation base for its Office of Strategic Services.

As of 1956, Tangier was reintegrated into Morocco. Due to its complex administrative history, it became well-known for being a hub of cultural and religious diversity.

According to popular legend, the demigod Hercules founded Tangier. Amazigh mythology suggests it was founded by Surfax, a different hero from Amazigh and Greek mythology.

Things to do in Tangier:

Caves of Hercules. This is Tangier’s main attraction. Legend has it that Hercules spent the night in a grotto in Tangier before embarking on his 11th out of 12 labors. He was charged to steal the golden apples of the Hesperides sisters, said to grant immortal life. 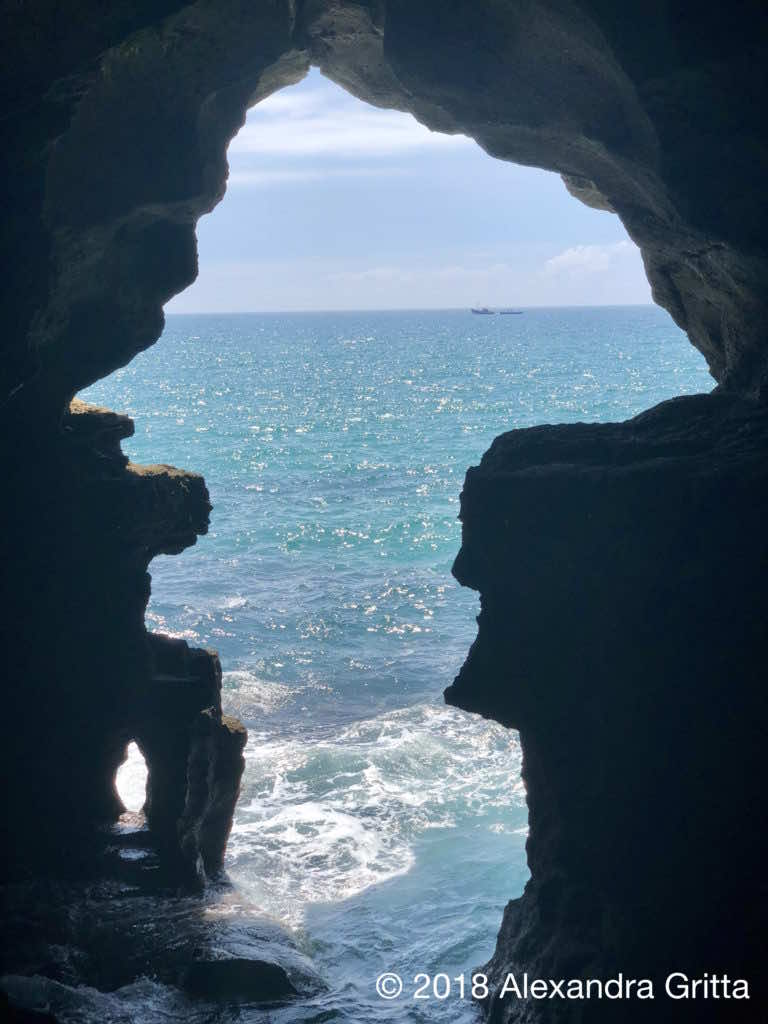 The main cave has two entrances: one that faces the sea and one that opens toward land and is accessible to visitors. The cave gets its fame from its seaward-facing entrance, which is shaped like the continent of Africa and known as “The Map of Africa.”

The site holds both mythological and archaeological importance. It is part natural formation and part man-made. The cave was originally much smaller, but the Amazigh people carved stone wheels out of the walls for millstone construction, considerably expanding the site, and the Phoenicians carved eye-shaped patterns into the walls.

Before the site became a popular tourist attraction, it was used as a brothel in the 1900s.

Admission to the cave is free and there is a snack shop as well as a cafe which overlook the sea. Visitors can also follow a set of stairs that lead down to a quaint beach. There is also a second, smaller cavern before the main entrance where visitors can pay a small MAD 5 fee to enter and take photos of the Greek-style decorations. A photo op with a parrot is available for an additional price, and guides charge MAD 5.

Cape Spartel. This is a vantage point with a lighthouse located 300 meters above sea level. It is a great spot to take scenic photos and admire the Strait of Gibraltar. On clearer days, the edge of Spain, only 14.5 kilometers away, can be seen across the water. 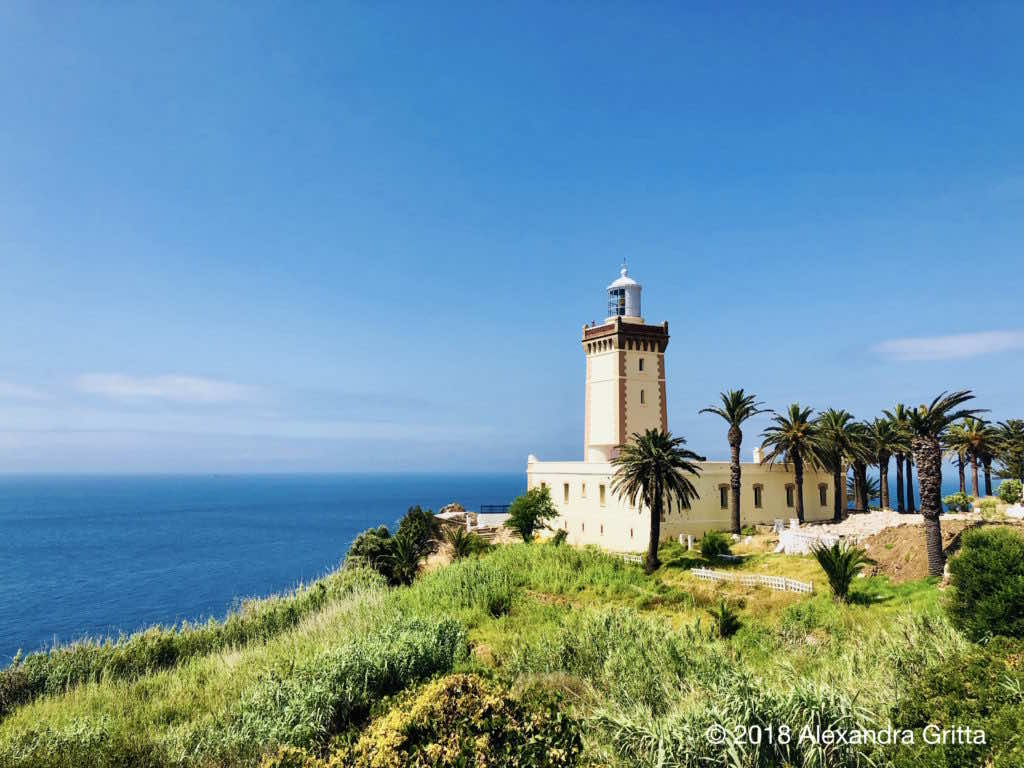 The “Battle of Cape Spartel” between the British and joint French and Spanish fleets took place in 1782, 29 kilometers off the coast of Cape Spartel. The battle was part of the American Revolutionary War, and the results were inconclusive.

Church of Saint Andrew. Some tourists may appreciate a visit to the modest but historic Saint Andrew Anglican church. The church still holds services and is known for its architectural blend of both Gothic and Islamic styles. The church overlooks a cemetery, which guests can also visit. Take note of the Lord’s Prayer written in elegant Arabic calligraphy inside the church. 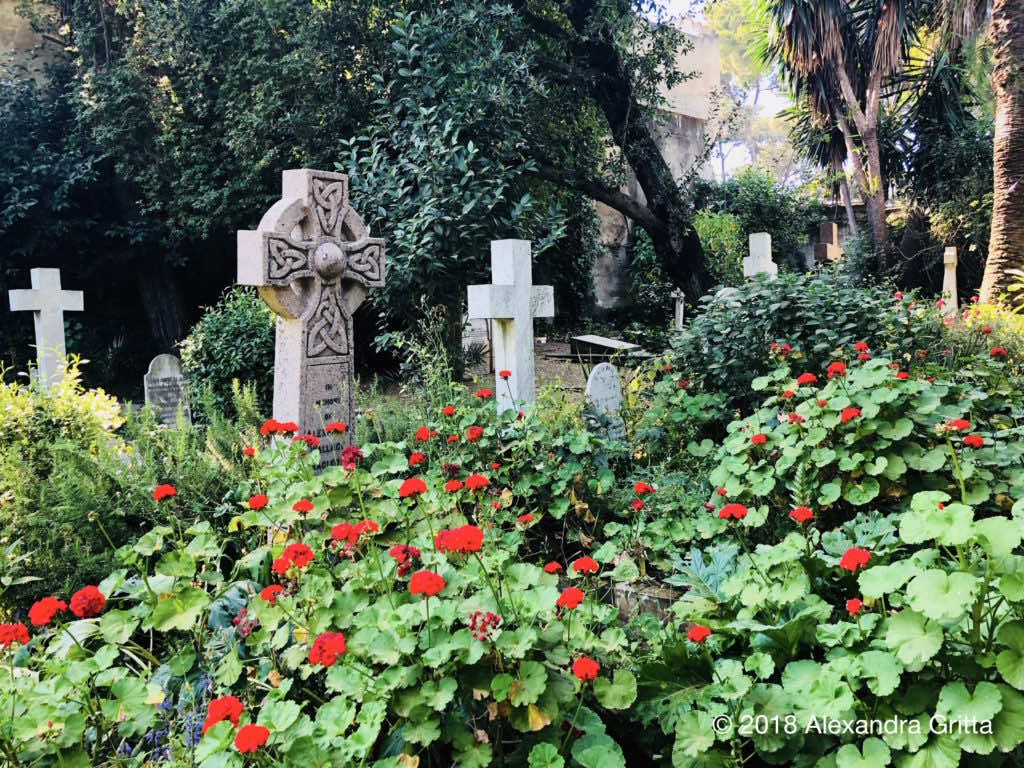 Emily Kenne, Sherifa of Wazaan (1849-1944), who introduced the cholera vaccine to Morocco, is commemorated at the church.

Kasbah Museum of Mediterranean Cultures. Ranking in at the top museum to visit in Tangier, the Kasbah Museum of Mediterranean Cultures helps tourists grasp the complexity of the city’s history. The museum was once the former sultan’s palace (Dar el-Makhzen) but has since been refurbished, featuring beautifully restored architecture that is an exhibit in and of itself. 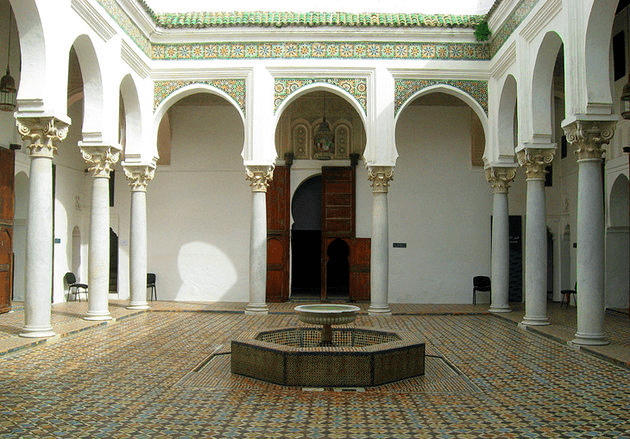 The museum also features a very charming Andalusian-style garden. Information and artifacts begin with prehistoric times and continue through the 21st century. Included are special exhibits, for example a display of Amazigh jewelry.

Some other notable highlights are the mosaic of Venus from Volubilis and giant map replicas—one map shows ancient Phoenician metal trade routes as well as electronic goods exchanges from the 21st century. A second map, created in Tangier in 1154, displays the known world of the time period.

Visitors should be aware there is an MAD 20 entry fee and displays are in French and Arabic only. Begin your visit in the first courtyard and work your way around the exhibits counterclockwise. The museum is located outside of the medina—to get there, enter the “Porte de la Kasbah” (the entrance to the city’s fortress) and follow the signs.

Try tajine de pescado. During its occupation, Tangier’s cuisine was greatly influenced by Spanish culture. Named after the earthenware pot in which it is served, tajine is a specialty Moroccan dish that usually contains spiced, slow-cooked savory stews made with meats and vegetables or fruits. 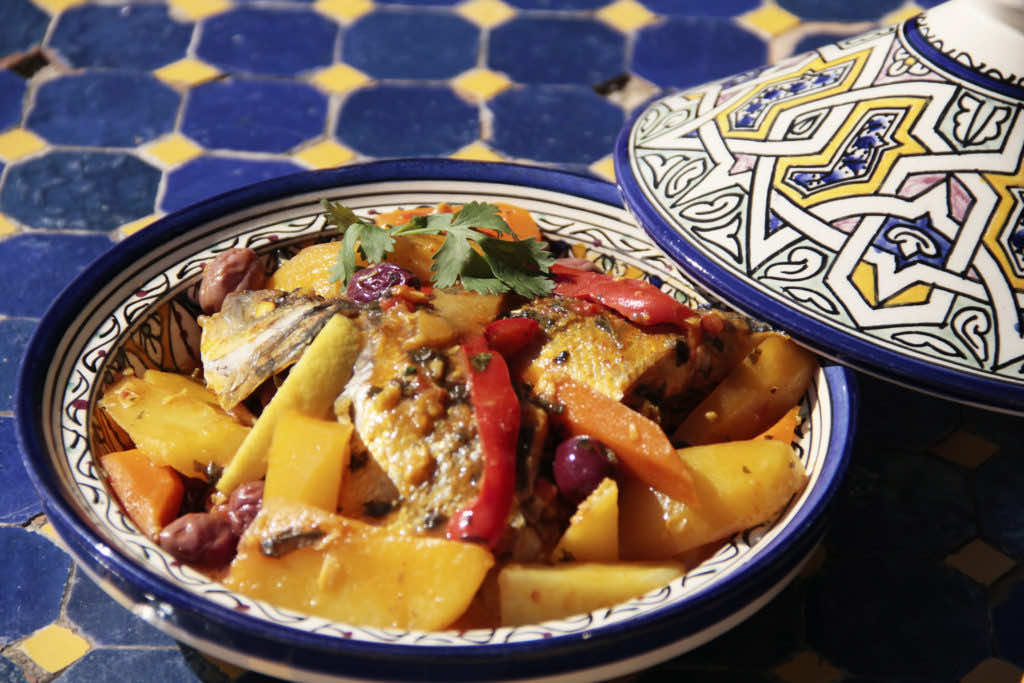 However Tangier’s “tajine de pescado” (tajine of fish) is its own version, containing fish instead of beef or chicken along with roasted tomatoes. Given Tangier’s proximity to the sea, it is no surprise that the city’’s specialty dish would contain seafood.

Catch the sunset at Cafe Hafa. This scenic cafe is located outside of the Kasbah, overlooking the sea. William Burroughs, Paul Bowles, Tennessee Williams, The Rolling Stones, and many other celebrities have frequented Cafe Hafa to enjoy mint tea and kif (cannabis), and to look out over the Mediterranean toward Spain. Sunset and nighttime are the best times to go as there is often music, but show up early because the cafe is quite popular and gets very crowded. 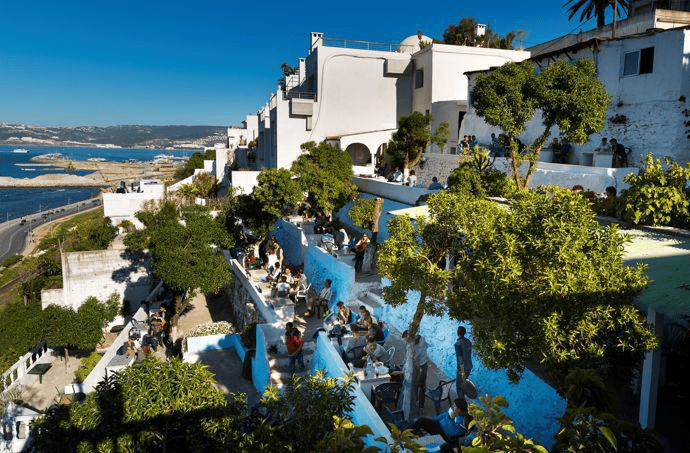 Hit the beach. Tangier’s beaches have wonderful and clean water. The summer weather is hot but has a pleasant breeze. The Bakassem beach is especially recommended for tourists and is kept very clean. 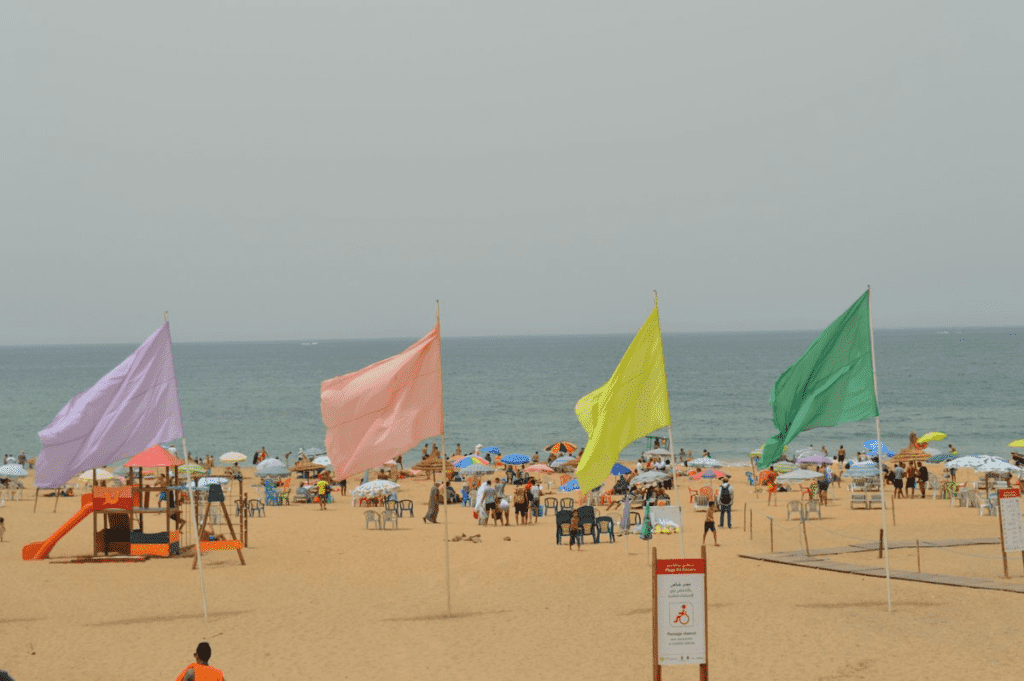 Stop by Asilah. Asilah is situated about 31 kilometers south of Tangier. Like Tangier, Asilah was formerly occupied by the Phoenicians, and it was part of “Spanish Morocco” from 1912 to 1956. Asilah is lesser known and smaller than Tangier, but it is worth taking a stop there to appreciate some of its beautiful architecture.

Asilah hosts a weekly Thursday market and annual music and art festivals, including a mural-painting festival. There is also a yearly International Festival held in August which features jazz and Moroccan music.