Rabat - Fatiha Ghamid, the public prosecutor in charge of women and children’s affairs at the Oujda Court of Justice, has urged Morocco to “invest more efforts and energy” to guarantee the rights of at-risk women and children, especially minors or children from low-income backgrounds “in need of special attention” from authorities. 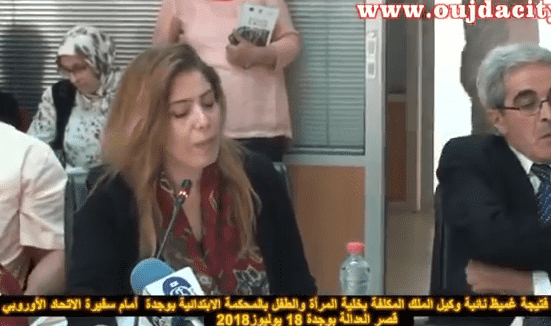 Rabat – Fatiha Ghamid, the public prosecutor in charge of women and children’s affairs at the Oujda Court of Justice, has urged Morocco to “invest more efforts and energy” to guarantee the rights of at-risk women and children, especially minors or children from low-income backgrounds “in need of special attention” from authorities.

Ghamid, who recently addressed an audience of legal authorities, government representatives, and international partners (mostly an EU delegation), noted Morocco’s recent efforts to protect the rights of women and children facing violence and related treatment both domestically and outside their homes.

She said that recent reforms in the country’s legal system have ignited more public debate around issues such as children’s right to proper education and basic care.

Arguing that the condition of ‘abandoned children’ and at-risk minors has improved since the year 2000, she said there is still more to do, especially as “many [at-risk children] still have their rights deliberately ignored in detention and social rehabilitation centers.”

Not surprisingly, then, despite perceived improvements in limiting violence against at-risk minors, “needy children” from low-income neighborhood are still experiencing violence, including economic exploitation and physical abuse, Ghamid said.

Explaining that in some cases economic hardship causes some parents and older relatives to use children for begging, Ghameid contended that inciting children to beg is considered a crime and should be tackled as such “in accordance with Moroccan legal provisions.”

For all her efforts to offer a “general overview of violence in Morocco,” however, Ghamid received heavy online criticism for her “pathetic” French level.

Taking issue with the Oujda public prosecutor’s “never-heard-of display” of French oratory skills, some internet commenters joked about her choice to give a public speech in a language she knew she was “terrible at” in the first place.

“Pathetic!!! Please stop this mind-boggling public carnage,” one user wrote on Facebook, adding that a translator was needed to help the audience make sense of what “our so-called public prosecutor is madly yelling.”

With more than 80 governmental and private bodies working to ensure the application of the existing legal framework in terms of child-related violence, Morocco should now “integrate a more humanitarian and social care aspect to the available legal work done to ensure efficient and well-adjusted measures to fully protect children and at-risk minors.”

According to Ghamid, fulfilling the “essential mission” of realizing full protection of children’s rights requires more effective coordination between all relevant authorities—government, civil society, and legal experts—as well as expertise-sharing and institutional cooperation with international partners “like the European Union.”

“In spite of a number of constraints, namely the lack of sufficient material means, we have been making some efforts to mitigate the violence and harsh treatment that women and children face in Morocco. But the means at our disposal are not enough.… That is why we need more involvement from the government and the international community.”