Rabat - Following the UNRWA announcement of major job cuts on July 25, thousands of Palestinian employees have protested at the organization’s main offices in Gaza, blocking the entrances and preventing staff from reaching them. 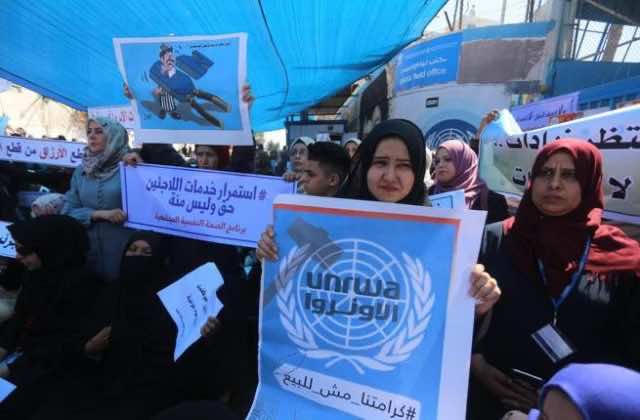 Rabat – Following the UNRWA announcement of major job cuts on July 25, thousands of Palestinian employees have protested at the organization’s main offices in Gaza, blocking the entrances and preventing staff from reaching them.

The United Nations Relief and Works Agency for Palestine Refugees (UNRWA) decided to end work contracts for approximately 145 out of 1,000 employees hired as part of an emergency appeal program.

Gaza’s UNRWA employees were shocked at the job suspensions, fearing the deteriorating rate of funds and resources available. The deputy chairman of the UNRWA’s staff union, Amal al-Batsch, told Al Jazeera, “This is a massacre against the employees. The solution to the crisis should not be at the expense of the staff providing services to the tens of thousands of refugees in the Gaza Strip.”

Employees are also concerned that more cuts are to follow. The jobs provided by the UNRWA in the health, education, and service sectors are indispensable sources of income for families in Gaza. With the cuts also come the psychological effects of being laid off, which only adds to the deteriorating living conditions in Gaza.

One man attempted to self-immolate outside the headquarters in Gaza but was stopped by his colleagues.

Another UNRWA worker Huwaida al-Ghoul cried, “I can’t express the amount of pain and sadness in my heart. I spent 16 years working and gave my best to my job.”

Financial crisis for the UNRWA

In response, the UNRWA administration have stressed their struggle. The UNRWA has provided social services, education, healthcare, food, and other aid to millions of Palestinian refugees since 1950. It is funded mainly by voluntary contributions from UN member states.

The decision by the Trump administration to cut aid from $365 million to $65 million at the beginning of the year has dramatically impacted the UNRWA. The largest ever reduction in UNRWA’s funding has left the organization battling to sustain its services.

Currently, the urgent priorities of the UNRWA are to feed, clothe, house, and educate the millions of people displaced by bombing. Gaza has become a region so devastated that according to the UN, it will be completely uninhabitable in 2 years. Electricity has become limited to 4 hours a day and clean water sources are depleted. Eighty percent of Gaza’s 2 million population are dependent on the UNRWA for survival.

In an interview with Ynet, Adnan Abu Hasna, a media advisor for the UNRWA, said, “We have no money to continue to supply food to these people here, and we don’t know what is going to happen.” He continued, “I think that UNRWA’s situation is not the same as it was six months ago. The situation has deteriorated. We are the main body in Gaza that supplies aid, food, medicine and education, practically the only one.”

During its weekly meeting in Ramallah today, the Palestinian Cabinet appealed to the international community and donor countries to provide support for the UNRWA in order to ensure that the essential services of food, shelter, and education can be provided for Palestinian refugees.

Criticism and debate surrounding the UNRWA

Yet, the job cuts are emblematic of more insipid policy within the UNRWA. They have become a pressing point of concern, as many worry that the UNRWA’s decisions to cut jobs and withdraw services is a decision both out of economic necessity and to align with the pressures of the international milieu.

Employees of the UNRWA and critics regard the job cuts as an adaptation to the Middle East Peace Plan propagated by the Trump administration, worrying that the job cuts are prescient of the agency’s eventual dismantlement, which align with the perception that Trump administration’s seeks to replace the Palestinian cause of autonomy with promises of economic prosperity and an aid package directly to the Gaza strip.

Mohsen Abu Ramadan, an economic analyst in Gaza, was critical of the organization: “UNRWA and many international organizations, especially those funded by the US in Gaza, are moving towards one direction, which is to replace the Palestinian cause – an end to the Israeli occupation and siege and the right of return for refugees – with a humanitarian agenda.”

The issue of UNRWA’s intentions has always been a source of controversy and critique. Within the discourse, the UNRWA has teetered the boundaries between an organization which serves Palestinian interests or humanitarianism, imposed by external actors.

Since its inception in 1950, many have regarded the UNRWA and its services for the Palestinian people as a quintessential example of “humanitarian management.”

For many Palestinians, the very creation of the UNRWA was an implicit agreement within the international community that there was no need to return Palestinian refugees to their land. The agency’s aid thus became equated with placation of their yearning to return and a stultification of their dissent.

Protesters vow that they will continue their protests. They are protesting against what they see as the unfair measures of the UNRWA but also for the agency to continue and for Palestinian desires to be heard.