Rabat - After his arrest July 26, an activist, opposed to the use of wheel clamps, has had his trial postponed twice. 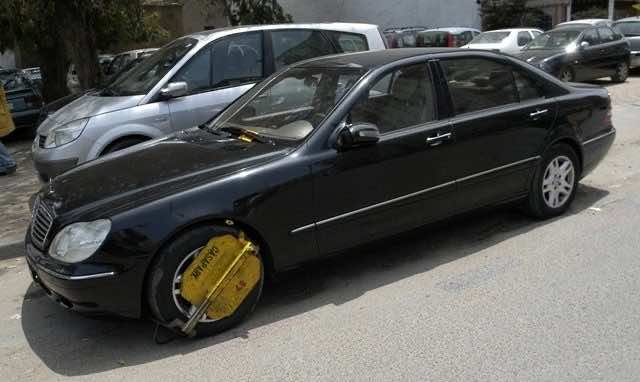 Rabat – After his arrest July 26, an activist, opposed to the use of wheel clamps, has had his trial postponed twice.

In Tangier, several citizens have started a campaign to protest wheel clamps, questioning the legality of the practice. The council, in conjunction with partnered parking companies uses wheel clamps to immobilize cars whose owners have not paid parking fees.

The wheel clamps can also considerable damage cars, leading to disputes over the clamps’ legality.

Most prominently representing the campaign is Mohamed Said Bouhaja, the owner of a car rental agency. On July 26, Bouhaja was arrested on six different charges which include “theft and destruction of public property, acquisition of tools to open or break locks and incitement to crime.”

The charges followed a complaint lodged against him by Somagec Parkings, the company which currently manages the underground car parks and ticket machines in Tangier. Somagec have accused Bouhaja of stealing 150 wheel clamps.

Upon his arrest, nearly 20 lawyers appeared to support Bouhaja, demanding that he be prosecuted on bail. However, the prosecutor general refused to grant him provisional release and has postponed his trial twice.

In a statement to H24, Omar Benaajiba, Bouhaja’s lawyer expressed his dissatisfaction with the arrest: “The police found no hoof or hoof key,” referring to the wheel clamps and the tools used to unlock and remove them. Benaajiba perceived the arrest of Bouhaja as “a way to scare the people involved in the fight against the laying of wheel clamps in Tangier.”

The issue of wheel clamps in Morocco

The battle against wheel clamps in Morocco is not new. In Rabat, the fight goes back as far as 1997. Abderrahmane Benameur was one of the leading figures against the non-legality of wheel clamps to immobilize cars.

In an interview with H24, he stated, “In the year 1997 or 1998, the Rabat City Council authorized a company to organize the circulation of part of the capital and to impose specific charges and set traps commonly called ‘sabots.’  So, I decided to fight in order to prove that these activities were illegal.”

After many years, Benameur was successful in his fight against wheel clamps. In 2014, the Court of Appeals in Rabat confirmed the illegality of immobilizing vehicles with a wheel clamp. The court decided that it was up to the Municipal Council to take the appropriate measures to implement the decision.

However, because the authority of the court’s decision was only local, other Moroccan cities still deal with wheel clamps.

Benameur stated, “In Casablanca, we can get today only compensation which ranges from 3,000 to 20,000 MAD depending on the severity of the damage inflicted and this may only be 1 or 2 years later.”

Many Casablanca residents in fact have complained that wheel clamps damage their cars, but few have dared to complain about their use and imposed taxes.

Benaemur emphasized to Moroccans the need for associations and further action in order to permanently suspend the practice of wheel clamping.