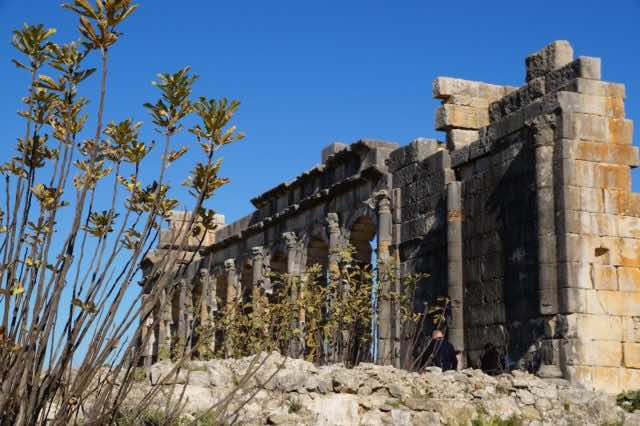 Volubilis, the abandoned ancient capital of Rome’s Mauretania-Tingitana province, has been accumulating hundreds of thousands of visitors and has in recent years expanded to include a new museum and visitor center.

In 1997, the United Nations Educational, Scientific, and Cultural Organization (UNESCO) evaluated the site and released a statement saying that “some of the reconstructions, such as those on the triumphal arch, the capitolium, and the oil-pressing workshop, are radical and at the limit of currently accepted practice.”

Nevertheless, the International Council on Monuments and Sites (ICOMOS) unanimously agreed that the site was “an exceptionally well preserved example of a large Roman colonial town on the fringes of the Empire.”

Volubilis, known in Arabic as “Oualili,” has been a UNESCO World Heritage Site since 1997, and many of its artifacts are on display at the Rabat Archaeological Museum.

In the 3rd century BC, Volubilis was an Amazigh settlement, but it became the capital of the Kingdom of Mauretania under Roman rule during the 1st century AD. The Romans greatly expanded the city during the 2nd century, adding a basilica, temple, and triumphal arch. Plentiful olive trees helped Volubilis prosper, as evidenced by the city’s large houses with fine mosaic flooring.

Around 285 AD, local tribes overtook Volubilis, and Rome did not attempt to recapture it, deeming the area too remote and vulnerable. For the following 700 years, the city was still inhabited; first by Latinised Christians, then by a Muslim group.

In the 8th century, Idris ibn Abdallah (founder of the Idrisid dynasty and the Moroccan state) chose the city for his seat of power. But in the 11th century the seat of power was transferred to Fez, and the population relocated to Moulay Idriss, located about 5 kilometers outside of Volubilis, leaving the city abandoned.

The city’s buildings remained largely preserved until an earthquake in the mid-18th century. Moroccan rulers also pillaged in search of stones to build Meknes. In the second half of the 19th century, both during and after French occupation, Volubilis was partially excavated and identified as an ancient Roman city. Since then, prominent buildings, high-status houses, and mosaics have been restored.

Archaeologists estimate that at any point in time, the greatest population in Volubilis was 15,000. Horse Carriages Struggle to Stay Afloat in Marrakech Amid COVID-19