Rabat - Morocco’s ambassador to Chile has ignited controversy for inviting an Iranian diplomat to the Moroccan embassy in Santiago. 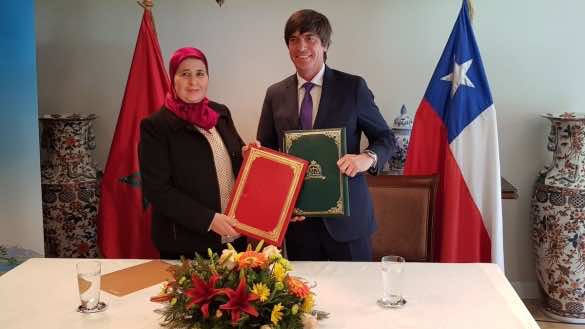 Rabat – Morocco’s ambassador to Chile has ignited controversy for inviting an Iranian diplomat to the Moroccan embassy in Santiago.

El Ghali controversially included the ambassador of Iran among her invitees, apparently ignoring the fact that Morocco cut diplomatic ties with Tehran in May.

The Iranian ambassador, Abolfazl Khazaee Torshizi, “readily accepted the offer and was spotted at the Moroccan embassy in the VIP row,” Al Akhbar reported today.

According Al Akhbar, the event was significant as it was “an international congress on cultural diplomacy organized by Morocco.”

The congress was themed “Cultural Diplomacy as a Bridge for Dialogue between Civilizations.” Hosts at the Moroccan embassy in Santiago celebrated culture and underlined its importance in the diplomacy of fast-moving global affairs.

At the Moroccan Ministry of Foreign Affairs, however, El Ghali’s move did not sit well with officials, and she was harshly rebuked for it, Al Akhbar’s source asserted.

When asked about her motives for inviting the Iranian ambassador, El Ghali reportedly said that she did not know of the diplomatic rift between Rabat and Tehran.

Some Moroccans trolled El Ghali, expressing disbelief at “her ignorance of Morocco’s stance” on a serious diplomatic issue. Others requested that she be sacked from her post.

“This is the sort of things that happen when we appoint high officials based on party-affiliation, rather than on competence in their supposed area of expertise,” one online commenter said.

“We have strong and indisputable proof, including names and specific incidents, that indicate that Hezbollah is logistically and strategically supporting the Polisario Front,” Nasser Bourita, Morocco’s foreign affairs minister, said at the time.