Rabat - Qatar has pledged to inject $15 billion into Turkey’s economy to rescue the country amid US sanctions and financial meltdown. But Turkey’s diplomatic crisis continues. 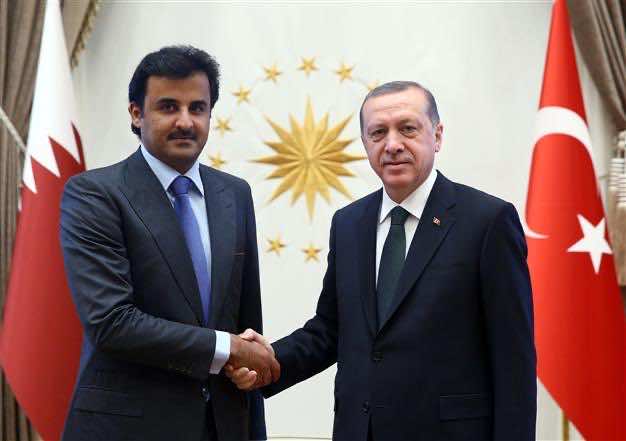 Rabat – Qatar has pledged to inject $15 billion into Turkey’s economy to rescue the country amid US sanctions and financial meltdown. But Turkey’s diplomatic crisis continues.

Qatari and Turkish officials made the announcement yesterday afternoon after the emir of Qatar, Sheikh Tamim bin Hamad al-Thani, met in Ankara with Turkey’s strongman, Recep Tayyip Erdogan, over a possible financial package as Turkey struggles with its worst financial crisis in years.

Qatar’s benevolent act comes at a dire time for Turkey’s economy, with the Turkish lira reaching record lows in the last few days as a result of a feud with the US.

Turkey’s currency lost more than 20 percent against the US dollar last week, and the country was in need of an urgent boost to build investor confidence and avoid an escalation of the country’s impending banking collapse.

The Qatari emir said that beyond financial calculations, his country’s primary motivation was to “stand by our brothers in Turkey,” a hint at the nascent but apparently strong strategic alliance between the two Muslim countries.

“We stand by our brothers in Turkey that have stood with the issues of the Muslim World and with Qatar,” Sheikh Tamim tweeted.

Ibrahim Kalin, a spokesperson for the Turkish presidency, tweeted: “Qatar has pledged $15 billion of direct investments in Turkey. Turkey-Qatari relations are based on solid foundations of true friendship and solidarity.”

The move has nonetheless been widely perceived as Qatar’s way of scratching its Turkish partner’s back, in recognition of Turkey’s support in recent tumultuous times for Qatar. A coalition of Arab countries, led by Saudi Arabia and the United Arab Emirates, isolated Qatar and imposed a diplomatic and trade embargo on the peninsular country in June 2017.

Ankara, which in 2015 set up a military base in Qatar, sent in troops amid the “Gulf Crisis” in June 2017. Ankara also sent a wide range of foodstuffs to Doha to mitigate the food shortage that resulted from the Saudi blockade.

“Big deal that could build investor confidence in Turkey, staving off potential economic collapse,” tweeted Soner Cagaptay, director of the Turkish Research Program at the Washington Institute for Near East Policy. Cagaptay added: “The Qataris believe Turkish deployment saved them from Saudi-UAE invasion. This may be how Qatar is paying back the favor.”

Tension with US continues

But while Qatar’s financial lifeline has given Turkey a much-needed breath of fresh air in the midst of several suffocating weeks, Turkey’s dispute with its US NATO ally has not diminished and may even escalate.

US officials said after the Qatari announcement that tariffs imposed on Turkish steel and aluminum would see no change until Ankara meets America’s demands.

President Trump this month imposed a series of economic sanctions on Turkey, asking for the release of Andrew Brunson, an evangelical pastor who has been detained for two years in Turkey on charges of terrorism.

On Wednesday, however, White House Press Secretary Sarah Huckabee Sanders said that the US imposed sanctions against its NATO ally on “national security” grounds and that even if Turkey were to release Brunson—whose situation magnified the Ankara-Washington rift in the first place—US sanctions would still not be lifted.

But Sanders’s remarks were made in response to President Erdogan’s latest retaliatory move in what has quickly become a show of force and strongman resolve between Trump and his Turkish counterpart.

The Turkish president on Wednesday announced an unprecedented 50 to 140 percent tariff raise on US alcohol, rice, and cars.

Prior to that, President Erdogan urged Turkish customers to boycott American electronic products. “If they [America] have iPhone, there is Samsung on the other side,” he said to a cheering crowd in Istanbul earlier this week, promising that Turkey would invest in its industrial sector and produce whatever was needed.

“We will no longer buy from the outside. We will produce, consume to our heart’s content, and then export to the world.”

Speaking about President Erdogan’s imposition of high tariffs on US goods, Sarah Sanders said that the move was “a step in the wrong direction.”

Turkey, meanwhile, has been busy seeking other alliances, including with China, Russia, Iran, and a wide range of other emerging countries, all of which Ankara sees as potential substitutes for its deteriorating relationship with the US and NATO.