Rabat- Approximately 8.1 million sheep and goats have been prepared for the Eid al-Adha sacrifice, exceeding the demand of consumers.

By
Ahlam Ben Saga
-
Ahlam Ben Saga is a Cultural Studies graduate from university Mohammed V of Literature and Humanities in Rabat.
Aug 16, 2018
Spread the love

Rabat- Approximately 8.1 million sheep and goats have been prepared for the Eid al-Adha sacrifice, exceeding the demand of consumers.

The Ministry of Agriculture and Marine Fisheries issued the statement, specifying that the certified livestock include 4.6 million male sheep, 1.38 million ewes, and 2.1 million goats. The number of sheep and goats exceeds the anticipated demand.

The number of livestock prepared for slaughter in 2018 increased significantly from 2017, when just 5.43 million sheep and goats were certified.

Ranchers and professionals in the sector were able to meet the demands of citizens, in addition to supplying 5.45 million cattle, 48 percent up from the expected number, said the ministry in a statement on Wednesday.

The ministry assured consumers that animal health surveillance programs and vaccination campaigns by the National Office of Food Safety (ONSSA) have ensured that the sacrificial livestock are in a healthy condition in all regions of the kingdom.

Sheep prices are estimated based on their weight, age, and sex, ranging from around MAD 1500 and MAD 5000.

In June, Minister of Agriculture Aziz Akhannouch, the Interprofessional Federation of Red Meat (FIVIAR) President Mohamed Karimine, and representatives of several organizations, including ONSSA, discussed the preparations of livestock for the Eid sacrifice.

The group assured Moroccans that all necessary measures were taken to deal with failure or non-compliance with quality requirements and that.

Eid al-Adha will be celebrated on Wednesday, August 22. It is the second of two Islamic holidays celebrated by Muslims worldwide on the 10th day of the Islamic Dhu al-Hijjah (the month of pilgrimage) in which the Hajj (pilgrimage) takes place.

After performing the Eid prayer in the morning, the oldest males in Muslim families proceed to sacrifice a sheep, goat, cow, or sometimes even a camel.

The sacrifice must be performed after prayer, as the Prophet Mohamed said, according to a hadith related by Sahih al Bukhari: “Whoever slaughtered (his sacrifice) before the Eid prayer, should slaughter again.” 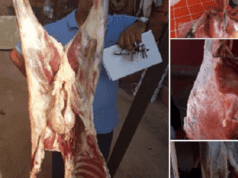