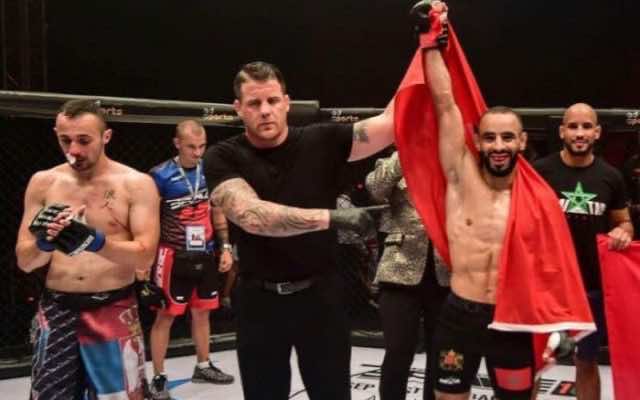 It only took 22 seconds for the Moroccan athlete to knock-out his opponent in the fight on Saturday, August 18. From the first seconds of the short and violent encounter, Ottman, who has earned 10 victories out of 10 in his league, dominated the Serbian.

In the 18th second, Ottman Azaitar’s sharp left hook destabilized Kokora, who stumbled, leaving the net to the Moroccan cage fighter, who finished his opponent with a “ground and pound.”

The referee decided to end the duel due to the ferociousness of the blow.

In a statement to the press after the fight, Azaitar said he was “delighted to achieve [his] first victory in Morocco.” He dedicated his victory to Moroccans and King Mohammed VI.

For his part, Brave Combat Federation (BCF) President Mohammed Shahid said in a statement to the press shortly before the kick-off event that it was “wonderful that the first African MMA fight is taking place in Morocco.” He praised the “quality of the organization and the facilities that were provided to hold of this exceptional event.”

Shahid stressed that Morocco’s strategic geographical position at the crossroads between Europe, Africa, and the Arab world “was decisive.” He asserted, “For us, Morocco is not only an event, but a symbol.”

The official said he was confident that the MMA is “promised a bright future in Morocco, since there are great Moroccan names in the discipline around the world.”

The regional director of the Ministry of Youth and Sports, Abdelouahed Azaibou, welcomed that “Tangier is hosting a major international sporting event that is likely to strengthen the influence of the city ??of Tangier, and Morocco in general.”

Saturday’s night of 9 fights was attended by 18 renowned fighters, representing a dozen countries. The event was attended by Bahrain’s Sheikh Khalid Bin Hamad Al Khalifa, who founded BCF in 2016.

Morocco’s State of Emergency Through an Australian Expat’s Eyes