Rabat - The standoff between Rome and Brussels continues as Italy’s government keeps warning it will boycott the EU if it does not share Italy’s migration burden. 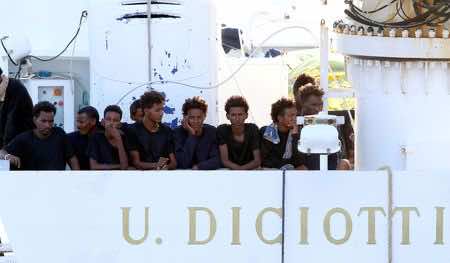 Rabat – The standoff between Rome and Brussels continues as Italy’s government keeps warning it will boycott the EU if it does not share Italy’s migration burden.

Rome’s latest spiral of swipes at the European Union started earlier this month over Italy’s refusal to disembark the Diciotti, an Italian patrol vessel carrying 170 migrants who were rescued in Italian waters on August 15.

The migrants are currently stalled at a port in Catania, eastern Sicily, while Italy demands commitment from the EU.

Cutting off the Italian contribution to the EU

Rome, insisting that it cannot provide a safe haven for all rescued migrants, has asked the EU to step in and agree to “burden sharing” that will see migrants split among EU countries.

Of the migrants stuck aboard the Diciotti, Italian authorities have only conceded to take in 27 unaccompanied minors, arguing that Italy “has had enough” of EU’s “hypocrisy” and inaction on the migration crisis in entry countries.

Deputy Prime Minister Luigi Di Maio warned that Italy would cut off its financial contribution to the EU should the organization fail to shoulder substantial responsibility in the disembarkation and redistribution of the migrants onboard the Diciotti.

“If they decide nothing regarding the Diciotti and the redistribution of migrants, I and the whole Five Star Movement will no longer be prepared to give 20 billion euros to the European Union every year.”

Di Maio, who issued his warnings prior to a high-level EU meeting in Brussels on Friday, August 24, doubled down on his threats after the meeting failed to comply with Rome’s demands. Di Maio argued that Italy needs to take bold and “retaliatory” measures, because the EU is allegedly turning its back on Rome.

“The European Union has decided to turn its back on Italy once again,” Di Maio wrote on his Facebook page. He added that Italy’s only choice was to “take a compensatory measure in a unilateral way … we are ready to reduce the funds that we give to the European Union.”

He explained: “They want the 20 billion euros paid by Italian citizens? Then let them demonstrate that they deserve it and that they are taking charge of a problem that we can no longer face alone. The borders of Italy are the borders of Europe.”

Meanwhile, some in the European Union have tempered Rome’s threats. “There are forces in Italy that are looking to co-operate, we want to believe Italy wishes to play the game,” France’s Elysee palace said in a statement.

Brussels swiftly hit back at Italy’s threats, however. The continental organization has shrugged off Rome’s comments as temporary mood swings and described its threats as “unconstructive comments.”

European Commission spokesman Alexander Winterstein said at a briefing after the Friday meeting: “Unconstructive comments, let alone threats, are not helpful and they will not get us any closer to a solution.”

“The EU,” the commission spokesman added, “is a community of rules and it operates on the basis of rules, not threats.”

Another EU source was quoted by Reuters as saying that no deal was reached regarding the Diciotti because the Friday meeting “was not a meeting where decisions were taken.”

EU sources suggested that Rome should understand that the migration crisis is a general one and that the organization is dealing with similar issues in other countries in addition to other major hot-button topics and serious concerns.

Rome, however, remains adamant on its funding and redistribution demands.

The country’s new strong man, the controversial interior minister Matteo Salvini, hit back at Brussels’ comments after the Friday meeting. Salvini, who has remained relatively silent at the start of the standoff on the Diciotti, picked up Di Maio’s threats in an interview on Friday.

“If in Europe they pretend not to understand, given that we pay a lot, we will do what it takes to pay a little less,” Salvini said.