Rabat - US Senator John McCain, savior of the world’s longest-held POWs—Moroccan soldiers in Tindouf, died on Saturday at the age of 81.

By
Tarek Bazza
-
Tarek Bazza is a journalist at Morocco World News with Master’s degree in Translation from King Fahd School of Translation in Tangier.
Aug 27, 2018
Spread the love

Rabat – US Senator John McCain, savior of the world’s longest-held POWs—Moroccan soldiers in Tindouf, died on Saturday at the age of 81.

“Senator John Sidney McCain III died at 4:28 pm on August 25, 2018. With the Senator when he passed were his wife Cindy and their family. At his death, he had served the United States of America faithfully for sixty years,” the office of Senator John McCain said in a statement.

McCain was a prisoner of war (POW) in Vietnam for more than 5 years. During the war in Vietnam, McCain was a bomber pilot, and he was captured when his plane was shot down in 1967.

During the Vietnam war, McCain refused to be released from the Hanoi Hilton prison until his fellow prisoners were freed with him. It was an action that showed McCain’s selflessness and heroism in the eyes of many Americans.

In 2008, McCain ran for president in the US as a maverick Republican. During McCain’s presidential campaign, he respected his opponent, Barack Obama. One voter told McCain, “I can’t trust Obama… he’s an Arab.” With characteristic integrity, McCain responded, “No ma’am, he’s a decent family man and citizen that I just happen to have disagreements with on fundamental issues, and that’s what this campaign’s about.”

McCain helped to save more than 400 Moroccan POWs

After Morocco reclaimed the Western Sahara territory from Spain in 1975, fighting broke out between the North African country and the Algerian-backed Polisario Front.

Since the beginning of the war between Morocco and Polisario, many POWs were detained until 1991 when both sides agreed to return POWs under a UN-mediated cease-fire.

Up to May 2005, the Polisario Front released approximately 903 Moroccan POWs, according to a report by Paris-based rights group France Libertes.

However, hundreds of Moroccan POWs remained in the camps.

Ali Najab, a pilot who was taken prisoner by Polisario in 1978 and released in 2003, met with a number of US leaders, including Senator McCain. “He was at UN headquarters to give voice to 408 of his countrymen who remained prisoners of war,” the UN said of Najab.

“We are not here to talk about politics. We are ordinary people who survived an extraordinary ordeal and hold a responsibility on behalf of our brothers in captivity … victims of ongoing and outrageous violations of international human rights,” Najab said.

In 2005, McCain called for the release of more than 400 Moroccans who were still detained by the Polisario Front in Tindouf in western Algeria.

“This is a gross violation of international law and a travesty of human rights,” said McCain.

McCain said he sent a letter to the Polisario leadership in which he called the front to release the remaining Moroccan POWs.

“I add my voice to this call for an immediate release. I do so in my official capacity but also on a very personal basis, as a former prison of war in Vietnam,” McCain said in his letter, quoted by Edward M. Gabriel, the US ambassador to Morocco between 1997 and 2001.

McCain quoted one of the Moroccan POWs in his letter: “I ask the others if I am a human being here or if I am an animal. We are Muslims. We believe in God. We pray. We are not rocks. We are living in this inferno. We are the forgotten victims of this drama. We have our lives to live. I have lost my youth. We have lost our families. Every time we receive letters, someone has died. How long is this going to go on? Please, will somebody notice us.”

McCain stated, “Let us hope (the Polisario) can be swayed, not by political pressures or promises, but by what is undeniably just and humane in the eyes of the world community.”

On August 18, 2005, Polisario released the Moroccan POWs to the Red Cross. They were later flown to Agadir aboard a US piloted aircraft and were welcomed by King Mohammed VI.

The Moroccan POWs detained in violation of the Geneva Conventions since the 1991 cease-fire were believed to be the longest held POWs in the world. Many of the prisoners were held for more than two decades while others were held for nearly 30 years. POWs were held for an average of 17 years. 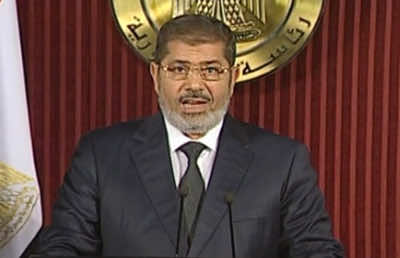 Morsi says remarks on ‘Zionists’ taken out of context

Egypt-US row over aid workers can be ‘resolved’: McCain