Rabat - Saad Lamjarred’s first French victim, Laura Prioul, has reacted to the decision of the suspect’s lawyer to withdraw from his case.

Rabat – Saad Lamjarred’s first French victim, Laura Prioul, has reacted to the decision of the suspect’s lawyer to withdraw from his case.

Prioul took to her Twitter on Thursday, sharing her thoughts on Eric Dupond-Moretti’s decision to drop Lamjarred’s case.

“Master Moretti drops the case. Realizing that life is too short to waste time with lost causes?” she wrote.

The lawyer announced his withdrawal from the case yesterday, opening the doors for rumors.

Lamjarred, who is facing his second charge of rape and violence in France, was arrested on Sunday, August 26, in Saint-Tropez in southeastern France.

King Mohammed VI recommended Moretti to defend Lamjarred when he was arrested in France on rape and violence charges in October 2016.

Jean-Marc Fedida, another member of Lamjarred’s defense team, denied the charges against Lamjarred after his release.

The lawyer told France Info that the singer had “a consensual sexual relationship” with the second victim, who accuses him of rape.

“He denies any violence against this person, of any nature whatsoever.”

Fedida also claimed that “no material findings can confirm the existence of such violence.” 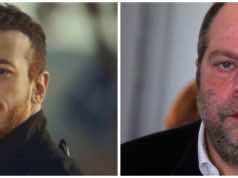