Rabat - Hakim Ziyech has proven again to be a top class player. 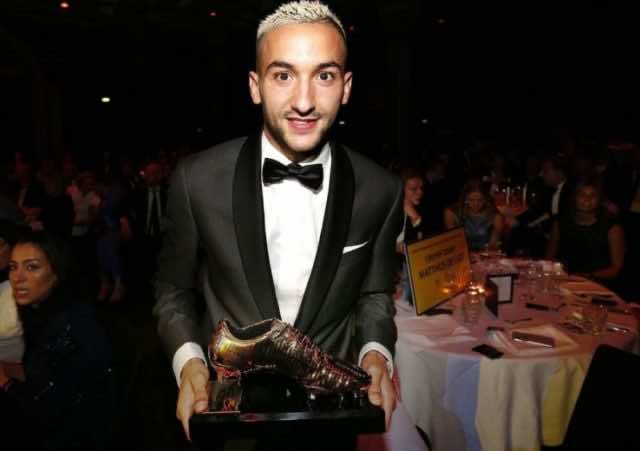 Rabat – Hakim Ziyech has proven again to be a top class player.

The Moroccan international footballer was awarded best player of the Dutch championship. He received the golden shoe from the Dutch newspaper Voetbal.

The Atlas Lion can count on the support of his family who came all the way to the Netherlands to be at his side during the ceremony. Several pictures of Ziyech and his mother circulated on social media.

It is the second time that the 23-year-old football sensation has received the distinction. He was also named best player of the year in 2016.

Ziyech is also not the only Moroccan to be awarded the golden shoe. In 2017, former player of Feyenoord Rotterdam and Moroccan international Karim El Ahmadi was also named best player of the Dutch nation.

In 2009, it was Morocco’s Mounir El Hamdaoui who won the Golden Shoe with 23.6% of the votes. El Hamdaoui was evolving at the time with AZ Alkmaar where he finished top scorer in the league with 24 goals in 31 games the same year.

In recent months, Ziyech has struggled to find his place with his own club, Ajax Amsterdam. After being linked to AS Roma, the footballer expressed many times his wish to leave, especially after his relationship with his club deteriorated.

The Atlas Lion was not happy to hear that the Dutch club replaced the number 10 jersey he always wore with number 22.

However, being a key player and an important figure, Ajax decided to renew Ziyech’s contract, convincing him to stay with a large pay rise.

Calcio Mercato quoted Ziyech saying that he was “very close” to accepting the transfer move offered by AS Roma. “But in the end nothing is done due to the lack of agreement between the two clubs, but there were other offers, but for those it was not worth leaving Ajax,” Ziyech said.

Ziyech also expressed his joy that he is staying with his team. “I did not expect to stay even this season, but now I am here and I will give everything for this jersey, I am very happy and I think I am in the best phase of my career.”

The footballer made it to Morocco’s A list in the 2018 World Cup and has also been chosen to participate in the CAN 2019 qualifiers.