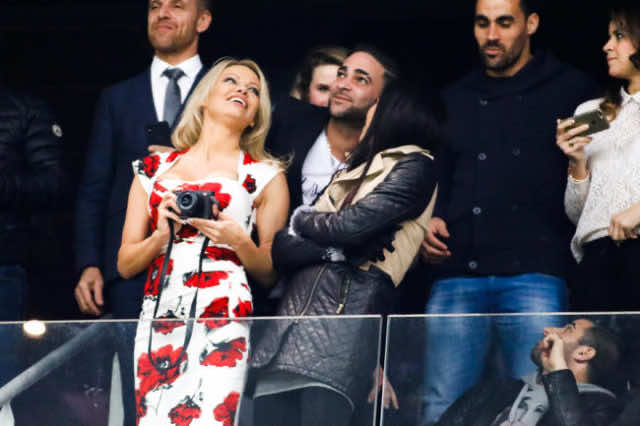 According to American tabloid TMZ, the “Baywatch” actress ended things with France’s World Cup champion after he proposed to her. She supposedly felt like he needed to spend more time with his children, 2-year-old twin boys.

The pair met in May 2017 during the Grand Prix in Monaco.

The 51-year-old actress has left the home she shared with the footballer in Marseille, the south of France, but is still in France where she will participate in the television show “Danse avec les stars” (the French version of “Dancing with the Stars”).

Anderson moved to Marseille earlier this year to be closer to her 32-year-old boyfriend.

TMZ added that Pamela Anderson gave her eldest son, Brandon, the ring Rami had given her this summer.

Contacted by media outlet Page Six, a close source to Anderson explained that the actress chose to make a “sacrifice for her love.”

“Pamela has the feeling that Adil doesn’t spend enough time with his children. She is removing herself from his life so he can do the right thing and be with his kids,” added the source.

Rami has reacted to the TMZ article. In an Instagram story, the football player simply wrote, “Gossip sells,” leaving his fans with a vague explanation concerning his relationship with the Canadian model.

The football player, who proudly expressed his Moroccan roots during the World cup,  denied the rumors of a possible marriage with the star. “No, no, no, I’m not engaged,” he replied, smiling, in a video posted by Closer.