Rabat- Moroccan social media users have shared a heartwarming photo of a mother carrying her son with amputated legs on her back to school. 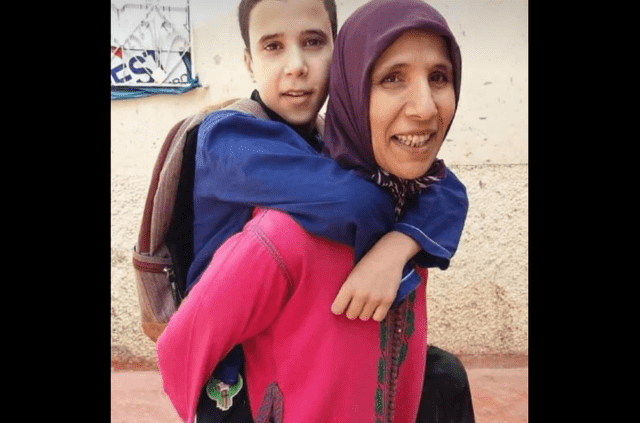 By
Ahlam Ben Saga
-
Ahlam Ben Saga is a Cultural Studies graduate from university Mohammed V of Literature and Humanities in Rabat.
Sep 15, 2018

Rabat– Moroccan social media users have shared a heartwarming photo of a mother carrying her son with amputated legs on her back to school.

The photo, which has been circulating online since September 11, tells the story of a mother who shares her son’s dream to pursue his education, despite all of life’s difficulties.

The person who took the photo wrote on his Facebook account that the mother carrying her son Redouane Sahrawi captured his attention as he was heading home from work in Fez.

“I asked her where she was going with [her son], she said she carries him to school every day, back and forth,” he said. The mother told him that the boy is in sixth grade, the last primary school year.

“It was the most beautiful picture I have ever taken in my life, of a mother who strives for her son’s education, whose dream and hope is to educate her son.”

The Facebook user concluded: “It is a moral for anyone who has a healthy body and mind.”

Another commenter provided more details about Redouane’s condition in a post with the same photo, writing that Redouane suffered from meningitis when he was in the fourth grade and had both legs amputated.

Many Moroccans who felt inspired by the photo, paid respect to the mother, setting her as a role model for all mothers and promising to provide the child with a wheelchair to make his school days easier.