Morocco World News
Home Culture Rabat’s Cathedral: From a French Past to a Sub-Saharan Future

If the French past of St. Peter’s is best epitomized by its facade, its present is most poignantly represented by its community, mainly composed of francophone sub-Saharans.

Rabat – In the past 100 years, the Catholic Church in Morocco has undergone a considerable transformation which had a significant impact on the role of St. Peter’s Cathedral in Rabat and the identity of its community.

The 10 minute walk between Rabat’s medina (old city) and Place al Joulane feels like a gradual, however remarkable, cultural transition—from the traditional Moroccan heart of the city to a considerably more Western atmosphere. The architectural style of the area, which almost evokes a 1970s’ European residential suburb, brings to light another crucial layer of Rabat’s history and identity: the French protectorate.

Besides the aesthetics of homes and offices, one building in particular could be considered a contributor to the French character of the area: St. Peter’s, Rabat’s Roman Catholic cathedral. In order to understand why, it is important to look back at the time of St. Peter’s construction.

St. Peter’s was built between 1919 and 1921. Rabat had already been the center of the French protectorate for almost a decade, and the Moroccan Apostolic Vicariate was about to be split into two. After the 1923 separation, the Vicariate of Tangier represented the areas under Spanish control, and Rabat covered the area controlled by the French. 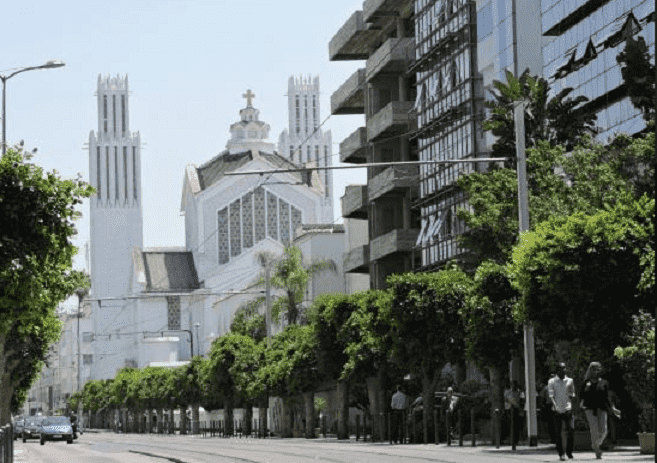 Considering its history, the casual observer might suppose that, in addition to representing the Catholic Church in Morocco, Rabat’s cathedral might have also been built to symbolize French authority. After all, until the beginning of the protectorate, Christianity had played a marginal role in the history of Arabic Morocco.

According to the historian Oronzo Giordano, Christians arrived in this area most probably at the end of the second century, when the greater part of present-day Morocco was a province of the Roman Empire.

Initially, Christianity became popular among local tribes, which interpreted its subversive, anti-hierarchical principles as the prerequisites for a potential alliance against the oppressive authority of Rome. When, however, the Roman Empire began its process of Christianization, the Berber tribes started opposing the religion.

After the arrival of the Arabs, some Christians remained, scattered in small communities under Spanish Franciscan or Dominican authorities. According to St. Peter’s archives, some Christians were enslaved in Morocco until the 18th century, when their captivity was abolished.

The number of Christians increased considerably between the 19th and the 20th century, due to the growing interest of European countries in Morocco.

Given the marginality of Christianity within Moroccan history, the presence of a majestic Catholic cathedral in the heart of Rabat might be interpreted as more suggestive of a cultural symbol of France, than simply a religious one.

When viewing St. Peter’s from the outside, several architectural elements give away the building’s “Frenchness.” The style could be described as an Art Deco revisitation of the French Gothic, mixed with Amazigh (Berber) and Arab artistic features.

St. Peter’s French Gothic component, though probably not as evident as that of Casablanca Cathedral, becomes more noticeable when looking at the layout of its facade, divided in three sections.

The enormous rose window which watches over Place al Joulane; the majestic, rectangular belltowers which stem from the lateral sections of the facade; and the pinnacles on their top evoke medieval French cathedrals, such as those in the northern French cities of Reims and Amiens and, above all, Notre Dame of Paris. 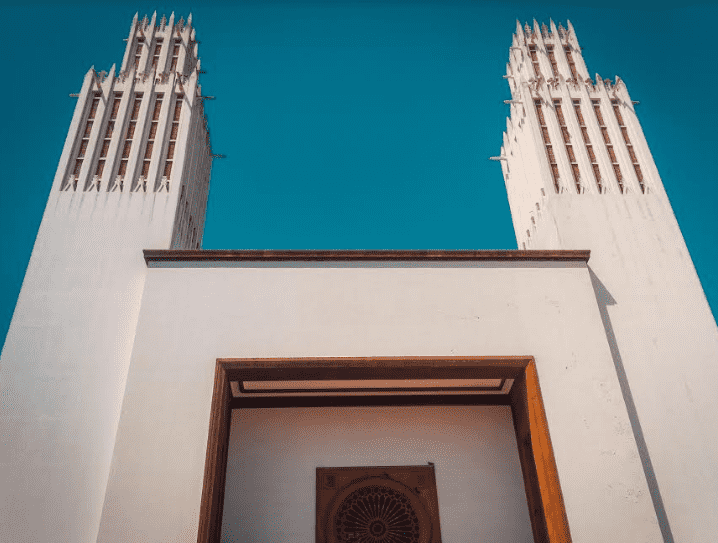 In an interview with Morocco World News, the archbishop of Rabat, Cristobal Lopez Romero underlined how the colonial matrix of the cathedral must not be forgotten, but rather admitted with humility as a fault of the Church. “We are guilty,” Lopez Romero said, “of having been introduced here as part of the French occupation.”

He then added, “While it is important to remember the role played by the Church in Morocco during the protectorate, it is even more necessary to communicate what we are now. It is no coincidence that they chose me, a Spanish Salesian, to represent what has historically been a ‘French archdiocese’: it’s the symptom of a need to state that we are here to represent the Catholic Church, not France.

“If in the past you would only see French citizens coming out of St. Peter’s after Mass, now our cathedral is home to a beautifully diverse community of Ivorians, Spanish, Congolese, Cameroonians, French, Senegalese, and many other nationalities.”

If the French past of St. Peter’s is best epitomized by its facade, its present is most poignantly represented by its community, mainly composed of francophone sub-Saharans.

The same place where, until 1956, French occupiers used to worship, has been transformed, now belonging to a community whose majority come from countries which the same occupiers had colonized.

The identity of the cathedral’s community is a powerful symbol: it not only represents a victory over colonialism, but it also exemplifies the unifying role of Catholic “inculturation,” the process through which Catholicism adapted to the cultures to which it was introduced. In this respect, the work of the Church can be interpreted as antithetical to the cultural shaping promoted by the powers which brought it to Africa.

The liturgical services at St. Peter’s are actually the product of two distinct inculturations. The first is the adaptation of the European church to the cultures of the sub-Saharan countries. The second is the combination of the diverse sub-Saharan cultures integrated with French traditions and contextualized within a Muslim-majority country.
The cathedral’s sub-Saharan soul is on full display during the Holy Mass on Sunday morning.

The almost entirely West African congregation stands up for an Afrobeat-like Gloria hymn, sung in French by the cathedral choir. The singers, all sub-Saharan, perform in white and blue robes while dancing and accompanying themselves with small percussion instruments.

The service, in French, is led by Spanish Archbishop Lopez Romero. After the offertory hymn, sung in Lingala (a Bantu language mainly spoken in the DR Congo), the choir sings the traditional hymns of Sanctus and the Agnus Dei in Latin.

The powerful message of intercultural dialogue and communality, however, does not simply lay in the linguistic diversity: it is the context that makes the difference. The fact Europeans and sub-Saharans sing prayers together in each other’s native languages in a country where both communities are foreign is a proof of the unifying power of religion, a power that breaks cultural boundaries. 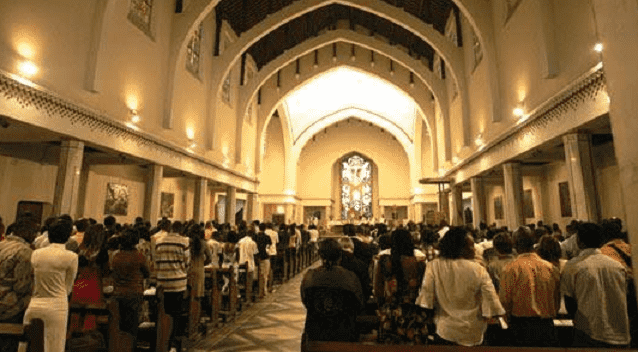 It is not surprising that no Moroccans are part of this community. Although the state guarantees to everyone the freedom to “practice his religious affairs,” reports of Moroccans who converted to Christianity include stories of social harassment, ostracism by family, and employment discrimination.

For this reason, the Catholic Church avoids all forms of proselitism and does not baptize local Moroccans.

Explaining the position of the archdiocese on the question, Lopez Romero said: “It’s a matter of priorities: ours is building the Kingdom of God (peace, justice, freedom, truth, life, love…). Baptizing Muslims here would put them in a very difficult situation, due to the social pressure and the rejection they would have to undergo. If someone feels a strong need to be baptised, it is always possible for him or her to go to another country and receive the First Sacrament [baptism] there.”

As the archbishop confirmed, the Catholic Church has a good relationship with the Moroccan government. “The only Christians having problems with the law here are those who proselytize,” he pointed out. According to Article 220 of the Moroccan Penal Code, anyone who “employs enticements to undermine the faith” of Muslims or converts them to another faith could be imprisoned for up to 3 years.

Lopez Romero went on: “The Catholic Church is not here with the aim of ‘recruiting’ new faithful. As I said before, our mission is building the Kingdom of God. To be able to do this, here like in any other part of the world, we contribute to the common good, fighting against poverty, violence, and discrimination. We aim to help everyone live their lives with dignity as children of God, which is what we all are.

“In order to achieve these goals in Morocco, we are working on projects geared towards the education of younger generations, the emancipation of women, the abolition of child labor, and the integration of ethnic and religious minorities.”

In an interview with MWN, Jean-Baptiste Gnahoua, an Ivorian member of the cathedral choir and coordinator of the local migrants’ association, spoke of how the church facilitates the integration of sub-Saharans in Morocco “The contribution of the church to our integration is, first of all, inspired by the words of the Gospel: tolerance, understanding, and respect of the neighbor.”

He added, “The Catholic Church hears our voices, and helps us by putting us in contact with NGOs, such as Caritas [and others], which are committed to solve social, juridical, and cultural issues that affect minorities.” 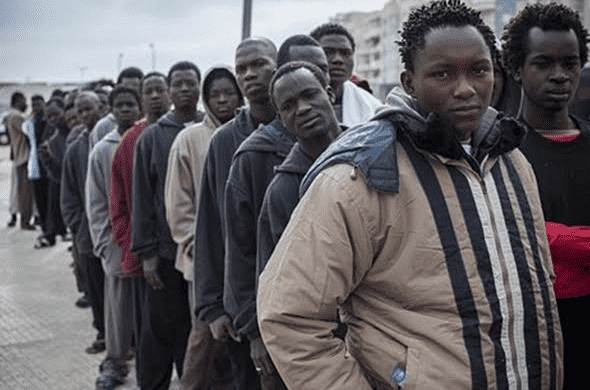 Jean-Baptiste concluded, “Having difficulties integrating often leads to unemployment. The problem of unemployment affecting sub-Saharans, however, is not only due to racism, as it is often the consequence of complications with the bureaucratic regularization of the immigrants. Nevertheless, although things have improved in general, the cultural barrier between us and the locals is still a major obstacle to our integration.”

Since a large number of sub-Saharans living in Morocco profess the Christian faith, the cultural barrier owes much to religious differences too. In addition to contributing to the acceptance of Christians, interreligious dialogue is a potential catalyst to the intercultural dialogue between sub-Saharans and Moroccans.

The archbishop stressed the primary role which interreligious dialogue has within the mission of the Catholic Church in Morocco. “We need to sensitize all society,” he said, “to the fact that Christians and Muslims are not like Pepsi and CocaCola: we are not competitors fighting over supremacy; we are fellow believers, faithful brothers and sisters praying together for peace.”

A Side Note on Debating Macron’s Insolence