Rabat - The 91-year-old cafe in Tangier, Le Gran Cafe de Paris, has secured a place among Telegraph’s  list of “the 50 greatest cafes on earth.”

Rabat – The 91-year-old cafe in Tangier, Le Gran Cafe de Paris, has secured a place among Telegraph’s  list of “the 50 greatest cafes on earth.”

The list delightfully described the place in a solo paragraph as a place to relax when you are not in a hurry to leave.

“The Gran Cafe, gracing the corner across from Morocco’s French consulate since 1927, has plenty of seats outside, where locals chatter, watch the traffic and smoke (they smoke inside, too) over cafes au lait,” wrote the Telegraph.

The Telegraph did not ignore the cafe’s host city: “It is natural that the city of rogues and writers, spies and sleazeballs should have a café culture.”

The cafe is considered the most famous in the city, getting a “must visit” in Tangier on Tripadvisor for trip and tourist recommendations.

The cafe’s charm is found in its simplicity as one of the first buildings outside the old medina (walled city) of Tangier.

The cafe has long been a resting place for famous educated people, including US author Paul Bowles and the American visual artist and writer William Burroughs.

The cafe hosted a scene in the Bourne Ultimatum movie starring Matt Damon in 2007.

Inside the cafe, leather and wooden chairs match the beige wall paint and tables.  The color gives the cafe a classy Western look.

The list of the top 50 cafes on earth includes Caffe Reggio in New York,  Cafe Olimpico in Montreal, Caf La Habana in Mexico City and Fazil Bey in Istanbul.

Morocco’s Tourism Receipts Dropped by $1.2 Billion in First Half of 2020 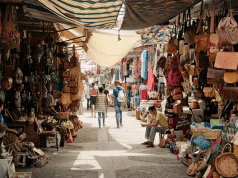