Rabat - The Ministry of Education has started taking action against controversial book adopted in a school that contains blasphemous content agains the divinity.

Rabat – The Ministry of Education has started taking action against controversial book adopted in a school that contains blasphemous content agains the divinity.

The Regional Academy of Education and Training of the Rabat-Sale-Kenitra region has removed all copies of a francophone schoolbook containing content that “violates divinity.”

Pictures of the controversial book from the school book have gone viral recently on social media.

The unidentified school used the book without asking for permission from the concerned parties.

The content reads: “The little God took a piece of paper, color pencils, and he painted the world.”

The text continues, “God started by creating the sky and earth. However, the sky was empty, and the earth too.” 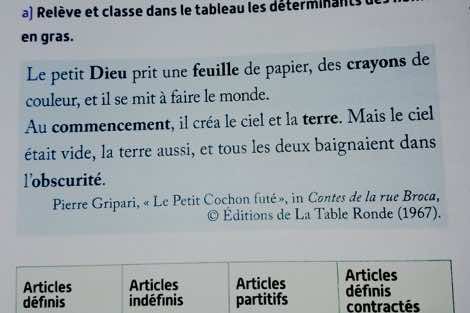 The text added to the backlash that erupted due to the use of some Darija (Moroccan Arabic) words in standard Arabic school books. The ministry sent a committee to investigate the case in the school.

After investigation, the committee decided not to fire the pedagogical director of the school, according to a statement from the regional academy.

The francophone controversial textbook was for the first year of secondary school.

According to the statement, the content violates Article 4 and 8 of Law 06.00 on private school education as it is not part of the official programs authorized by the academy.

The statement added that it has not received any request from the school to allow it use the controversial school book.

Throughout this month, Moroccan parents and citizens expressed their concerns about the content and quality of education in Morocco.

Including Darija in controversial book angered some people, calling on the government to remove all books that contain words in Moroccan Arabic, describing them as unuseful.

Head of Government Saad Eddine El Othmani said that he supported citizens’ stance, adding that the government is “ready to give up” on the school books.

El Othmani has also slammed people who defend the use of Darija in education, including Noureddine Ayouch.

El Othmani made his position clear on the use of Darija in school books. In the first week of school, the official said that Darija cannot be used in education, emphasizing that “the official languages recognized by the Constitution are Arabic and Tamazight.”

On Saturday, the prime minister also thanked citizens for their “strong stance” against the use of Darija in education. He said their position supported the position of the government.