Rabat- Moroccans have condemned the violence committed against a Sub-Saharan migrant in Nador, as shown in a new video. 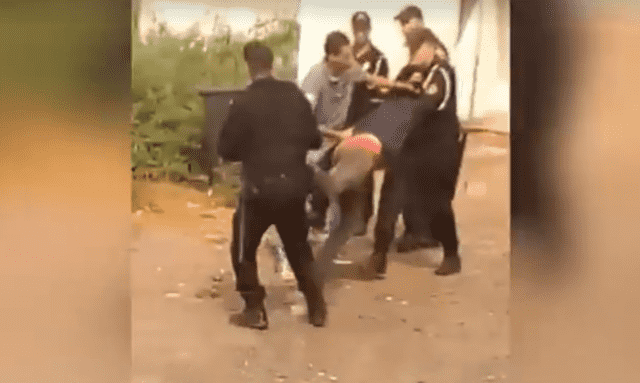 By
Ahlam Ben Saga
-
Ahlam Ben Saga is a Cultural Studies graduate from university Mohammed V of Literature and Humanities in Rabat.
Sep 22, 2018
Spread the love

Rabat- Moroccans have condemned the violence committed against a Sub-Saharan migrant in Nador, as shown in a new video.

“Here is how Sub-saharan migrants are treated,” the Moroccan association for human rights captioned a video posted to its official Facebook page.

The video shows a group of policemen violently handling a sub-Saharan African migrant at a police station in the city of Nador, in the northeastern Rif region.

The human rights association claims that the migrant was ill and had requested to be taken to a hospital when the policemen forced him out.

The video, which dates to September 11, has provoked angry reactions from Moroccans who described the act as “cruel” and “racist.”

It is not the first time that sub-Saharan migrants received similar treatments and complained of violence.

On July 8, a fire blazed among the belongings and camps of sub-Saharan migrants in a park in front of Ouled Ziane bus station in Casablanca, following gas bottle explosions. The camps were home to dozens of undocumented sub-Saharan African migrants.

The incident occured only a few hours after a fire broke out in camps of sub-Saharan migrants in Fez.

Although authorities did not announce an official cause of the fire, some sub-Saharan migrants in Casablanca claimed that drug-addicted “hooligans” in the region had tried many times to set their camps on fire.

“Those unsober hooligans come to our camps, but we don’t chase them away because we don’t have the right to because it’s their country,” a migrant said to Moroccan news outlet Hespress.

“We are strangers here, so we can’t bother them,” he stated.

In November 2017, violent clashes between sub-Saharan migrants and a group of Moroccans broke out in the area, resulting in a fire in the same park of Casablanca.

Hundreds of sub-Saharan migrants arrive in Morocco each year. Some attempt the perilous crossing from the North African country to Europe, especially Spain.

In 2017, the UN High Commissioner for Refugees (UNHCR) assistant high commissioner for protection, Volker Turk, told Morocco World News that Morocco is now establishing itself as a destination for refugees and migrants.

“Morocco remains a transit country for refugees and migrants, it is also fast becoming a country of destination,” said Volker.

Morocco, however, has been calling for more lasting solutions to end the struggles faced by migrants.