Rabat - After a series of tweets against Morocco 2026, the president of the Saudi Arabian Football Federation now has Moroccan fans scratching their heads.

Rabat – After a series of tweets against Morocco 2026, the president of the Saudi Arabian Football Federation now has Moroccan fans scratching their heads.

On Thursday, Turki Al Sheikh wrote a Facebook post announcing his unwavering support for Morocco to replace Cameroon as the host of the 2019 Africa Cup of Nations.

“In my capacity as President of the Arab Football Federation, I announce my full support for the brotherly Morocco in hosting the African Nations Championship instead of Cameroon,” said Al Sheikh.

He also announced that he would offer any help if his “brothers from Morocco asked me to do so.” A campaign against Cameroon maybe?

Why does Al Sheikh’s tweet come as a surprise?

Throughout the competition between Morocco and the joint North American bid for the 2026 World Cup, Al Sheikh posted tweets hinting that Saudi Arabia would support its “strongest” Western ally in the vote to host the massive tournament.

Al Sheikh brought up the politics of Morocco’s neutrality in Saudi Arabia’s standoff with Qatar in regards to the vote, a mixture of politics and sports that did not sit well with Moroccans.

But since Al Sheikh’s country was not part of the bid, Moroccans swallowed the remarks as South Africa also brought politics to explain their choice not to vote for Morocco’s bid.

However, US President Donald Trump threatened countries to vote for the North American bid.

In one of his controversial tweets, Al-Sheikh wrote,  “Some people went astray. If you want our support, you should seek it in Riyadh. What you are doing is wasting your time. Now ask the pseudo-state to help you,” referring to Qatar.

The adviser then initiated a campaign against Morocco’s bid, convincing other states to vote for Saudi Arabia’s “strongest” ally instead.

Politics has become an entrenched part of sports. It was highly engaged in the 2026 World Cup, when both Saudi Arabia and South Africa explained their choice to vote against Morocco for political reasons.

Several Moroccan officials have explained that Morocco does not have an agenda to host the African competition or replace Cameroon as host.

The president of the Confederation of African Football (CAF), Ahmad Ahmad, expressed anger about Cameroon’s unreadiness to host the African cup since most of the projects designed for the competition were not completed yet.

In August, Ahmad said, “I am not sure Cameroon is ready to host the AFCON.”

Al Sheikh’s new position is also puzzling, as it comes amid rumors of tension in Moroccan-Saudi diplomatic ties.

One day after the World Cup vote (June 15), Morocco decided not to take part in a meeting of communication ministers from countries in the Coalition Supporting Legitimacy in Yemen on June 23 in Saudi Arabia.

Morocco has been supporting the Saudi-led coalition in the war against Houthis in Yemen.

Later, Saudi King Salman chose to spend his summer vacation in Neom in Saudi Arabia instead of his traditional Moroccan destination: Tangier.

Both moves opened doors for speculation on a potential diplomatic rupture between the two countries.

However, King Mohammed VI sent an invitation to the Saudi King in August through his tourism minister, Mohamed Sajid.

King Salman also conveyed greetings to the Moroccan King emphasizing the ties of “fraternity linking the two royal families and the solidity of historical relations between the two peoples.”

In another message to Saudi Arabia, King Mohammed VI expressed his pride over the diplomatic bonds between the two countries on Saudi Arabia’s 88th National Day. 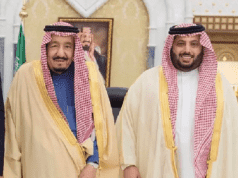