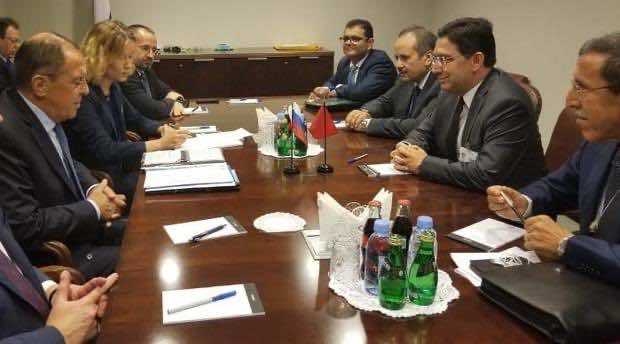 The officials’ bilateral talks took part on the sidelines of the 73rd session of the United Nations General Assembly, which opened on September 18.

Morocco strives to secure Russia’s support for its strategy to include Algeria fully in the UN-led political process aimed at finding a mutually acceptable political solution to the Western Sahara dispute.

Morocco stresses that the Polisario- the breakaway movement that claims to represent the Saharawis and wants to establish an independent state in Western Sahara- is not master of its destiny and the only way to achieve a political solution to the conflict if for the United Nations to admit and includes Algeria in the negotiations.

Nothing has filtered so far about the topics discussed during the meeting.

During his participation in the UN General Assembly, the Moroccan diplomat also held talks with Under-Secretary-General and the Head of the United Nations Office for Counter-Terrorism (UNOCT), Vladimir Voronkov.

Morocco has mobilized a delegation of several high-level officials to reinforce diplomatic ties with several capitals.

Yesterday, the Moroccan minister met with Trump. Morocco’s delegation participated in several sideline symposiums, including a high-level meeting to promote and commemorate the International Day for the Total Elimination of Nuclear Weapons.