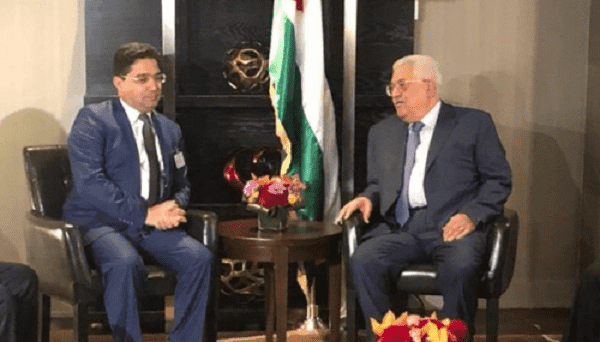 At the meeting, the minister discussed King Mohammed VI’s “great efforts” to defend Jerusalem and the cause of the Palestinian people.

Nasser Bourita told OIC foreign ministers, on the margins of the 73rd UN General Assembly, that Morocco will spare no efforts to “continue its action with its brothers and sisters in the Islamic world to defend the just cause of the Palestinian people and achieve lasting peace for the peoples of the region.”

According to Bourita, the efforts of King Mohammed VI to defend Jerusalem are “part of Morocco’s commitment to the inalienable rights of the Palestinian people.”

He said that the efforts are both “in terms of diplomatic action with the leaders of the major powers and the international community and at the economic level through the activities of the Beit Mal Al Quds Agency and its development programs aimed at supporting the Holy City.”

The North African country was among the first countries that condemned the US move to recognize Jerusalem as the capital of Israel and the relocation of the US embassy to the city.

In June, King Mohammed VI addressed a message to the participants of the 5th International Conference on Al-Quds.

In his message, read by Bourita, the King said Morocco had “immediately rejected [the US move] and considered it to be incompatible with international law and with the relevant Security Council resolutions.”

He also recalled the letters he sent to UN Secretary-General Antonio Guterres and US President Donald Trump on the dangers of the embassy move.

“In my letters, I emphasized that any modification of the legal, political or historical status of Jerusalem would have serious repercussions on peace in the region,” said the monarch.

On Friday, September 28, Bourita reiterated that Morocco remains convinced of the need to “explore the international consensus rejecting the latest critical developments in the Palestinian question through new wise and realistic actions in collaboration with all international partners and influential forces.”

He also called on the OIC member states to take their responsibility “seriously to face the new challenges and defend Palestinian law as well as the legal statutes of the Holy City of Jerusalem.”