Rabat - Morocco and France have signed a partnership agreement on cereals. France showed interest in exporting its wheat to the Moroccan market.

By
Tarek Bazza
-
Tarek Bazza is a journalist at Morocco World News with Master’s degree in Translation from King Fahd School of Translation in Tangier.
Oct 10, 2018
Spread the love

Rabat – Morocco and France have signed a partnership agreement on cereals. France showed interest in exporting its wheat to the Moroccan market.

Chakib Alj, president of the National Federation of Mills (FNM) and Philippe Heusele, president of France Export Cereales signed the agreement on Tuesday in Casablanca, as part of the 21st conference on “The Franco-Moroccan Meetings of Cereals.”

The three-year agreement will enable the two parties to develop their training for grain milling and boost the cereal trade between France and Morocco.

Under the agreement, both parties will provide training in “laboratory management, training technicians as instructors in France, or granting educational materials to students of Casablanca’s Training Institute for the Milling industry (IFIM).”

In addition to training for milling, the agreement also focuses on bread making. “There is also a part on laboratory and analysis to develop the Moroccan bakery, confectionery, and milling industry,” Heusele said.

“France, the world’s fourth largest exporter of milling wheat, has exemplary relations with Morocco, both politically and economically. French grain farmers want the start of the marketing campaign to be an opportunity to consolidate and further strengthen these commercial exchanges,” explained Heusele in the conference.

“France has the quantity and quality to supply the Moroccan market with up to 50 percent of its wheat imports,” Heusele told Reuters.

However, on the sidelines of the conference, Alj said priority on imports would be given to Russian and Ukrainian wheat which have “the best quality-price offer,” according to Reuters.

In a previous statement to Les Eco, Alj said France no longer has the same presence in Morocco’s imports. “Before, France accounted for 60 to 70 percent of our imports. Today, it is between 30 percent to 40 percent.”

Although Morocco is interested in Russian and Ukrainian markets, Thierry de Boussac, of the national union of foreign trade of grains in France, indicated that “France presents itself this year under better conditions.”

Alj stated that Morocco will start importing French wheat in February or March “depending on whether there is still Russian or Ukrainian wheat available,” Reuters reported.

France Export Cereales expected that Morocco would import 3 million ton of soft wheat between 2018 and 2019.

The conference brought together over 300 participants, including 50 experts who were international traders, hardware dealers, technical experts, and institutional experts in the Moroccan and European cereals sectors. The meeting was held under the patronage of French Ambassador to Morocco Jean-François Girault. New CGEM President: We Will Work Together to Overcome Crisis 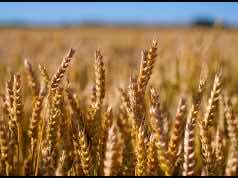