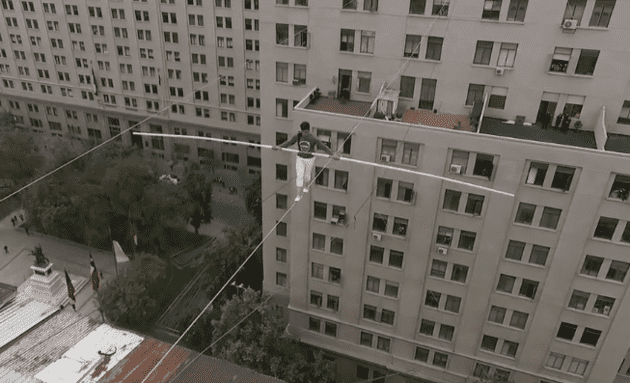 Walking  65 meters on a narrow wire with nothing to hold onto but a pole to help maintain his balance, “Danger” emerged victorious on Wednesday in Santiago, Chile, in front of the La Moneda presidential palace.

Crowds of people surrounded the area to watch and cheer for “Danger.”

Danguir, 41, is considered one of the most adventurous professional tightrope walkers in Chile.

In a statement to Maghreb Arab Press, Danguir, who is from Tangier, said that his achievement allowed him to raise the Moroccan flag in Chile and honor his home country.

Danguir’s two months of practice have paid off with the successful performance that both shocked and thrilled viewers from around the world.

In 2010, Danguir broke a Guinness world record when he drove a motorcycle on a 130-meter-high steel cable in Benidorm, Spain.

Danguir has performed in several countries, beginning his career with a Spanish circus, “Los Muchachos,” and Los Hermanos Ringling Circus.