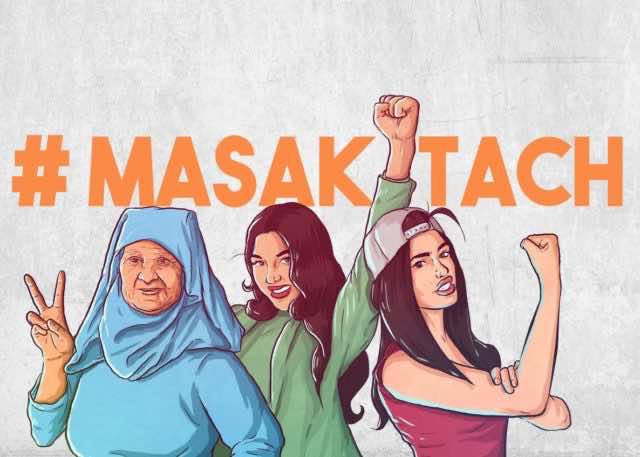 Rabat – The #Masaktach (I won’t be silent) movement in Morocco is bringing out women’s personal experiences of harassment and assault.

As Moroccans across the country came together for International Women’s Day on October 10, the #Masaktach campaign, launched in September, has continued to reverberate through the country’s culture. The movement aims to highlight routine discrimination and violence targeting women in Morocco.

The #Masaktach campaign is the culmination of several stories circulating around Morocco press outlets. The most prominent is the case of Khadija, a 17-year-old who claims to have been abducted and repeatedly raped and tortured for almost two months by a gang of 12 men and boys. Police arrested the suspects, ranging from 17 to 28 years old, who now face various charges, including kidnapping, torture, and rape.

As #Masaktach has gained support, activists launched an official Facebook and Twitter, each quickly gaining more than 1,000 likes. “Women are the weakest link in Morocco but Khadija’s case his us very hard and deep. How she was abused, objectified and stripped of her humanity went beyond the imaginable,” said Leila Slassi, a co-founder of the group.

But the initial catalyst for the #Masaktach campaign stems from accusations facing Moroccan pop-star Saad Lamjarred, who is facing two separate charges of rape in France. Lamjarred is currently awaiting trial in a French jail.

Activists on social media launched the hashtag calling for radio stations to boycott the artist. Popular stations Radio 2M and HitRadio have announced they will no longer play songs by Lamjarred. Still others have resisted: Chada FM stated it would not boycott Lamjarred’s songs until his case went to court, “assuming that the accused is innocent until he has been sentenced.”

While the story of Khadija and the accusations against Lamjarred certainly played a role in getting #Masaktach trending, just as important were the stories of ordinary women across Morocco sharing their experience of harassment and assault.

The movement will inevitably draw comparisons to the #MeToo movement which began in the US last year.

Morocco World News spoke to Stephanie Willman, a founding partner of Mobilising for Rights Associates (MRA), an organization which fights for women’s equality. She views the #Masaktach movement as a first step of what needs to be a continuing process.

“The #Masaktach movement is important in that for the first time, women have used their voice to speak out about sexual harassment in a way that has gotten national attention.” Willman went on to elaborate that the next step in the process must be a public outing of those who are responsible, and finally an admittance of guilt from the perpetrators themselves.

“The success of the #MeToo movement came in part because some high-profile perpetrators, such as Harvey Weinstein, were actually arrested and charged.” Willman added she does not know if the Moroccan justice system is prepared to face that kind of task.

The criticism comes even after Morocco’s government passed Law 103-13 criminalizing all forms of harassment and violence against women, which went into effect in September.

Willman was critical of Law 103-13, titled “Elimination of Violence Against Women,” stating that the law did little to provide a process for police and prosecutors to deal with the sensitive subject of sexual harassment and assault.

Although Morocco has made progress towards women’s equality, a recent UN and Promundo report outlined just how entrenched attitudes regarding gender based harassment in Morocco truly are. The study found that 63 percent of women had experienced some type of sexual harassment, while 53 percent of men admitted to perpetrating such acts, including unwanted touching, catcalling, and stalking or following.

The study elaborates: “Why do men commit such acts? Almost 60 per cent of those who had ever sexually harassed a woman or girl said they did it for fun or excitement; around a fifth cited a desire to show off to their peers. Nearly three-quarters of male respondents maintained that a woman’s ‘provocative’ dress, and for some, her presence in public places at night, are legitimate reasons for harassment.”

While the #Masaktach movement, much like #MeToo, has certainly had a short-term cultural impact in Morocco, it remains to be seen what, if any, long term impacts the movement may have.