Rabat - A court has sentenced a Moroccan activist to two years in prison for condemning the Navy shooting of Hayat Belkacem, a migrant.

Rabat – A court has sentenced a Moroccan activist to two years in prison for condemning the Navy shooting of Hayat Belkacem, a migrant.

The Royal Moroccan Navy opened fire on a migrant boat off the coast of M’diq and Fnideq in the Mediterranean September 25, killing Hayat Belkacem, a 20-year-old native of Tetouan in northern Morocco.

On September 30, police arrested Soufiane Al-Nguad for protesting Hayat’s death at a football game in Tetouan between the Maghreb of Tetouan and the Kawkab of Marrakech.

Through Facebook posts, Al-Nguad had called on other football fans to mourn the death of the migrant by wearing black, his lawyer told French outlet Le monde.

Radical Tetouani football fans, known as the ultra matadores, broke planters and knocked down garbage cans while shouting slogans condemning the killing of the Tetouani student.

According to Al-Nguad’s lawyer, Jabir Baba, the Tetouan court charged the young activist with “insulting the national flag,” “spreading hatred,” and “calling for civil insurrection.”

The court charged other football fans, aged 14 to 23, with the destruction of public property, unauthorized protests, and insulting the national flag.

Increasing numbers of Moroccans are attempting to enter Spain illegally by crossing the Mediterranean. The Spanish Ministry of Interior stated that 10,104 undocumented Moroccan migrants arrived in Spain between 2016 and 2018. 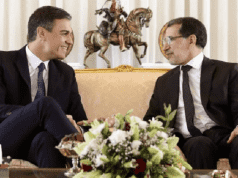