Rabat - Morocco and Spain are promising to step up efforts to stop migrants on their borders. 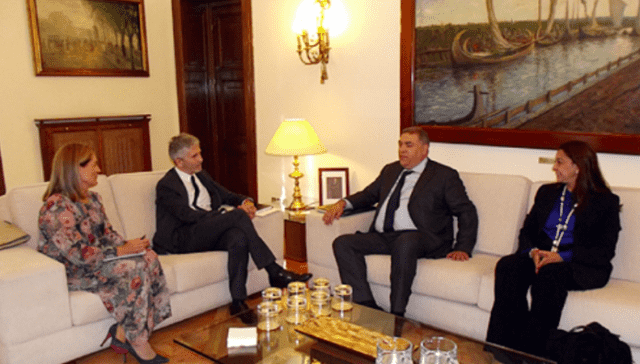 Rabat – Morocco and Spain are promising to step up efforts to stop migrants on their borders.

Laftit told the press after the meeting, “We also talked about other aspects of Moroccan-Spanish relations that are extremely important for both countries.”

Marlaska said, “We mainly discussed the issue of migration and how to cope with significant migration flows, the majority of which are motivated by economic reasons.”

The Spanish official emphasized that his country is a voice for Morocco at the European Union.

“Morocco is and must remain a privileged partner, and it is in this sense that we are moving forward.”

He also emphasized that Laftit conveyed King Mohammed VI’s thanks to King Felipe VI of Spain and Spanish Prime Minister Pedro Sanchez for their efforts to bring Morocco’s migration concerns to the heart of the EU’s priorities.

During the Summit of EU Heads of State and Government held in Brussels on October 17-18, Sanchez proposed an EU support plan for Morocco to manage migration flows.

European Council President Donald Tusk and European Commission President Jean-Claude Juncker supported the proposal, according to a statement from the Spanish presidency.

On Thursday, October 19, the Spanish foreign minister called on the EU to increase its support for Morocco for border control.

Spanish pressure on the EU followed an increasing wave of migrants on its borders in recent months.