Rabat - In the lead up to the Security Council’s meeting on Western Sahara, Secretary-General Guterres has met US Secretary of State Mike Pompeo. 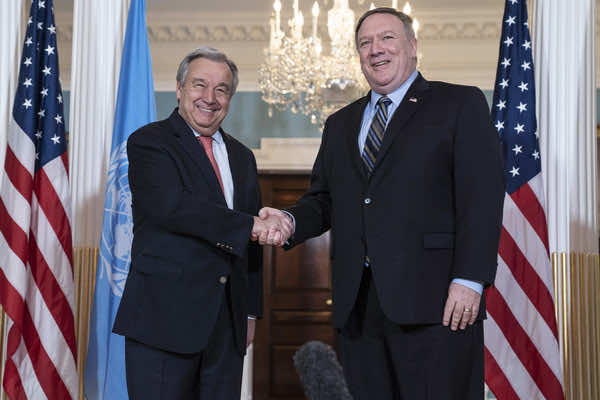 The US Department of State confirmed on October 23 that Guterres met Pompeo and US Under Secretary for Political Affairs David Hale.

While the agenda does not say what the officials discussed, the meeting followed a closed meeting between Morocco’s Ambassador to the US Lalla Joumala and Hale on Monday, October 22.

A source that asked to speak on condition of anonymity told Morocco World News that Lalla Joumala met with Hale to convince him of Morocco’s position in favor of a one-year extension for the MINURSO mandate. The Security Council will set MINURSO’s mandate at its meeting Monday, October 29.

On Tuesday’s meeting, Guterres may have informed Pompeo and Hale why he believes a one-year extension would be beneficial for the UN-led political process.

The United States reportedly wants the mandate to be renewed for six months only. However, Guterres has called on the Security Council to include a one-year extension for MINURSO in its resolution.

Guterres believes that six months is not enough for him and his personal envoy for Western Sahara, Horst Kohler, to create the conditions to allow the UN-led political process to move forward.

In order for the US to vote for a one-year extension, Pompeo and Hale have to convince Trump’s favorite: US National Security Adviser John Bolton.

The anti-MINURSO official believes that MINURSO is an unnecessary force that has failed to fulfill its purpose despite 27 years in the region.

Bolton also plans to convince the Trump administration to cut aid to MINURSO next year.

France, a member of Group of Friends for Western Sahara, is in favor of the one year extension. The small group, which includes the US, the UK, Russia, and Spain, prepares the Western Sahara resolutions for the UN Security Council.

MWN’s source said that the group started their discussion on the draft resolution, which will be submitted by the US to the Security Council this week.

The UN’s personal envoy invited Algeria earlier this month to attend a discussion round-table on the conflict in December in Geneva.

The roundtable will convene Algeria, Morocco, Mauritania, and the Polisario Front.

Algeria, however, will attend the talks only as an observer party and not a main party to the conflict.

Political analysts predict that Morocco will not send high-level officials in response to Algeria’s reluctance to be involved. Morocco has been urging Algeria to admit its role as a main party in the conflict and not an observer.