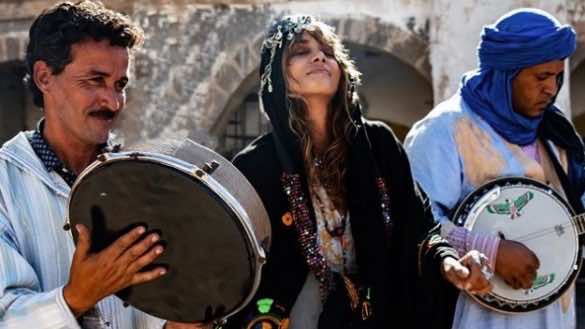 The two stars have shared on Instagram a string of photos and have Snapchatted their time in Morocco’s “Atlantic Blue Pearl” port city.

Berry boasted a Bohemian look with a headscarf and colorful, striped traditional dress as she held a cat, captioning her Instagram, “One with the locals.”

That feeling when magic happens.

Keanu Reeves is also enjoying Essaouira. The Hollywood star shared photos of him and his fans in the city and magical moments in Essaouira’s mesmerizing desert.

The movie staff arrived in Morocco in August and will continue shooting in the country until December.

Celebrities and Hollywood remain enamored with Morocco’s charm, as illustrated by directors’ penchant for filming in Morocco, primarily in Ouarzazate, “the gateway to the desert.”

Pop superstar Madonna also went into raptures over her memorable 60th birthday party in August in Marrakech. The singer, calling herself “BerberQueen” as she donned the Moroccan Amazigh look, shared a plethora of photos and videos of her time in the city on her Instagram with fans.

She thanked Morocco for a “magical birthday week.”