Rabat - While Moroccan officials believe that GMT is beneficial for the country’s economy and carries no risk for people’s health, Moroccans have lashed out at the government over its sudden move to stay on the Daylight Saving Time (DST) year-round.

On October 26, Morocco World News conducted an online poll in which it asked whether Moroccans are for or against the decision to maintain the DST.

Eighty percent (862 voters) out of 1087 people voted against the move. Only 218 people said they are in favor of the decision. The majority of news outlets conducted similar polls, which showed similar results.

Moroccans also created several Facebook pages and campaigns to vent their anger against the move.

Parents of Moroccan students took to social media to express their rejection of the move and their worries about the long-term effects of such a decision. Most parents expressed their concerns about the negative impact of the DST on their children health and security, especially in mornings.

In response, the Ministry of Education announced a new time-table for all public and private schools, vocational training institutes, and universities. The ministry said that schools will start at 9 a.m. and end at 6 p.m.

Moroccan parents, however, argue that a one-hour lunch break is not enough, especially for students who live away from their schools.

“The government takes a decision without taking into account citizens’ opinions. I have my daughter studying in Mohammed V high school in Kenitra. She takes the bus to get to school. The bus takes between 20 to 30 minutes to arrive to school,” a parent told Morocco World News.

He added that his daughter “cannot do that anymore when she finishes school at 1 p.m. and has to get back at 2 p.m. I cannot afford to pay her launch every day.  The government should provide students with cafeterias. The situation is a total mess.”

On October 27, Morocco’s National Federation of parents expressed their categorical rejection of the government decision. calling on the government to cancel its “hasty decision.” 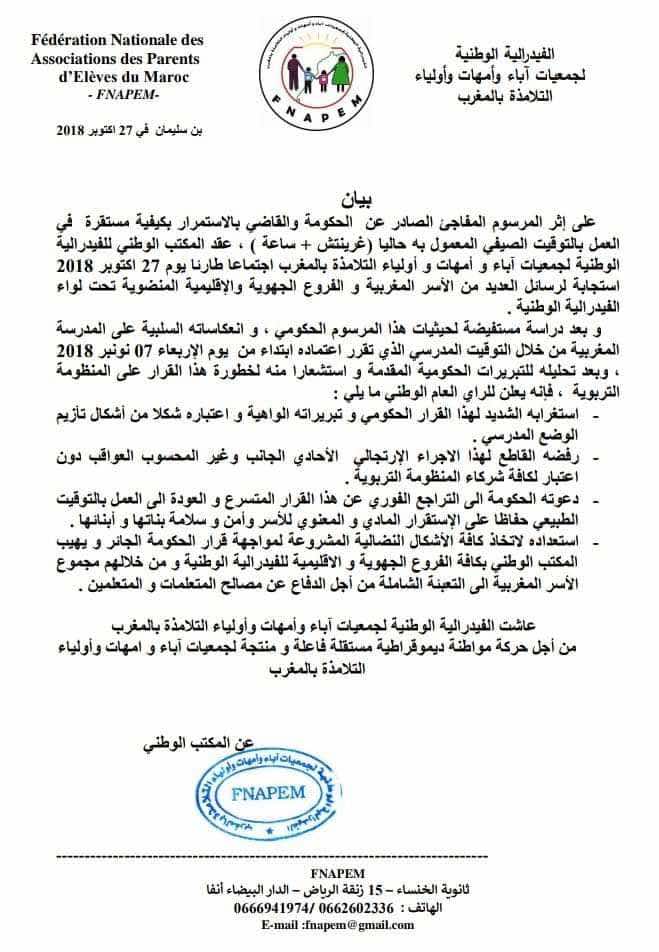