Rabat - A fire broke out at a camp of sub-Saharans migrants near Ouled Ziane bus station in Casablanca on Saturday night. 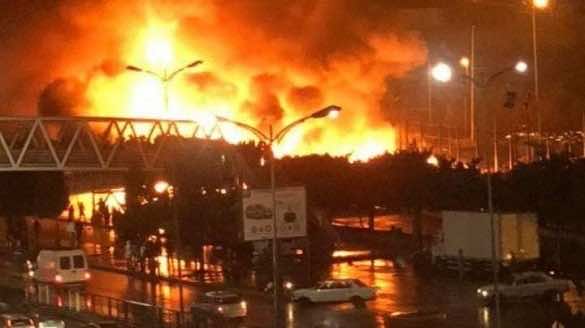 According to L’Observateur Du Maroc et d’Afrique, the incident was caused by the explosion of six gas cylinders.

The state-owned news agency, Maghreb Arab Press, has not yet published any official information about the incident.

Videos on social media show several tents catching fire during the incident. No damages were sustained, according to local news outlets.

A similar incident occurred in July, when a fire broke out during the evacuation of a group of undocumented sub-Saharan migrants from a property owned by the National Railway Office (ONCF) near Fez’ train station.

The fire resulted in damage to nearly 50 plastic shelters used by migrants. The blast also caused the explosion of seven small gas cylinders that migrants used to cook, local authorities of the prefecture of the Fez-Meknes region said at the time.

Every year, hundreds of sub-Saharan migrants arrive in Morocco, using perilous crossing from the North African country to Europe.

Saturday’s incident took place at a sensitive moment as the government is stepping up efforts to find concrete solutions to tackle migration issues.

Morocco has refused to house reception centers of migrants to the EU.

“Morocco is generally against all kinds of centers. It is part of our migration policy and it’s a position in the name of national sovereignty,” he said.