Rabat - In an expression of solidarity with the American Jewish community a Muslim-led campaign has raised over $100,000 in about 30 hours.

By
Tamba François Koundouno
-
Oct 29, 2018
Spread the love
Following the Pittsburgh synagogue attack, a Muslim-led campaign has raised over $100,000 in about 30 hours in an expression of solidarity with the American Jewish community.

The campaign organizers described the move as a “message of unity” and shared humanity.  They argued that it is now more than ever crucial to stand united against the divisive forces of current American politics.

In the online message that launched the fundraising campaign, organizers said they wished to “respond to evil with good” as Islam commands.

The fundraising, they explained, is aimed at sending a vibrant message of compassion through action. All collected funds would go to the Tree of Life synagogue shooting victims, “whether it is the injured victims or the Jewish families who have lost loved ones.”

“We wish to respond to evil with good, as our faith instructs us, and send a powerful message of compassion through action. Our Prophet Muhammad, peace be upon him, said: ‘Show mercy to those on earth, and the One in the Heavens will show mercy to you.’ The Quran also teaches us to ‘Repel evil by that which is better.’”

CelebrateMercy and Mpower Change, the two Muslim organizations that started the campaign, went beyond a message of simple largesse in a time of crisis, however. They argued that such expressions of generosity convey the message of a necessary and genuine interfaith dialogue to counter seeds of division facing the US and the world.

“While these senseless acts have filled us with sorrow, we reflect on the message of unity, tolerance, and mutual protection found in the Constitution of Medina: a historic social contract between the Medinan Jews and the first Muslim community.”

They called on other faiths to contribute, promising that the funds raised would immediately be transferred to “our local partner on the ground: The Islamic Center of Pittsburgh (ICP).”  ICP, for its part, “will be working directly with the Tree of Life synagogue to distribute funds to affected families.”

The Muslim-led campaign of unity and compassion comes at an emotionally-charged time for the American Jewry, which grieves the tragic death of 11 of its members.

The attack, which has been described by US authorities as a hate crime, occurred at the Tree of Life synagogue in Pittsburgh, Pennsylvania, as the neighborhood’s Jewish community convened to celebrate the Sabbath.

Minutes into the religious celebration, Robert Bowers, who is now being described as a white supremacist, entered the synagogue shouting, “Death to all Jews.” He then opened fire on the crowd, killing 11 and injuring dozens of others.

The incident has since reignited debates about topics as ranging and divisive as the rise of the extremist far fight, surging anti-Semitism, and US regulations on guns. 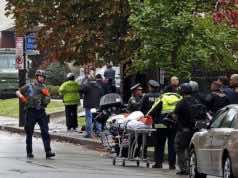