Rabat - Representatives of Moroccan and German governments have signed a convention to foster agricultural cooperation. 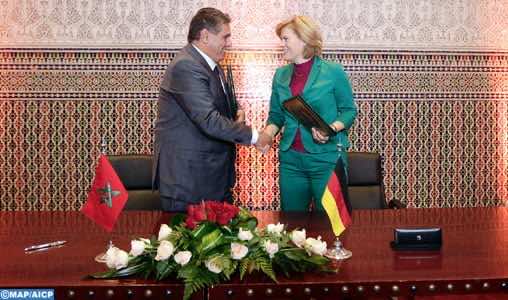 During a Monday meeting in Marrakech however, Germany and Morocco decided that there was room for further cooperation and integration of their agricultural policies.

In addition to increased agricultural output, the long-term goals of the cooperation include channeling Germany’s technological knowhow and its human and financial resources to Morocco’s evolving food sector. The convention is set to be a “true platform of sharing and collaboration.”

According to an official statement by the Moroccan government, Monday’s convention comes as a follow-up and a reinforcement of the German-Moroccan Center for Agricultural Council (CECAMA).

Created in 2014, CEMACA was meant to help Morocco reach its Green Morocco Plan of “high-performing, modern, and ecologically sustainable agriculture.”

Together with CEMACA, the newly signed convention is expected to create more pathways to achieve the goals of the Green Morocco Plan.

While the two may not be directly linked, the convention comes at a time when Germany—and Europe in general—is giving momentum to its Africa-oriented foreign policy.

Faced with a flow of African “economic migrants,” many European leaders and policymakers have said that Europe needs to engage more with the continent. Such voices have argued that, unless African states show signs of socio-economic prosperity, European borders will not be at ease.

Speaking to German investors on Tuesday, Chancellor Angela Merkel echoed similar sentiments. The German leader told her compatriots to ditch Asian markets, where they have heavily invested in recent years, in favor of Africa, “where the future is.”

“For many years we have been focusing on Asia. I think the future is increasingly turning towards Africa,” Merkel said at the Compact Africa, a Berlin-held summit of Germany’s diplomatic and trade efforts in the African continent.

The unarticulated sentiment is that the safest bet in containing the dynamic Europe-bound African mobility is to invest in African markets and create opportunities to accommodate the continent’s many unemployed youth.