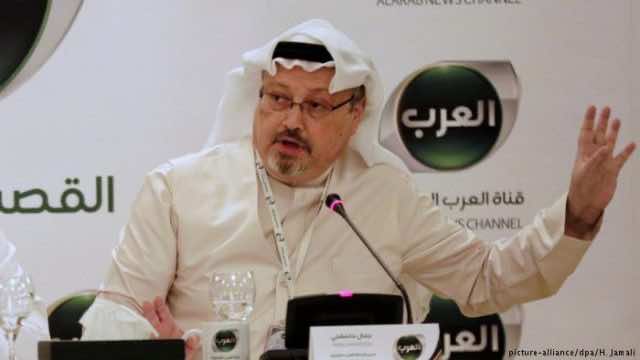 Jamal Khashoggi, a prominent Saudi journalist who was harshly critical of the Saudi crown prince, disappeared on October 2 after entering the Saudi consulate in Istanbul to obtain documents for his upcoming marriage.

Since news emerged of his brutal murder, many in the international community have celebrated the journalist as a freedom fighter and a needed voice of resilience and subversion against Saudi Arabia’s state apparatus.

A late-October New York Times report linked Khashoggi’s murder to his unapologetic criticism of the regime in his native Saudi Arabia.

Days before his death at the hands of Saudi security officials, Khashoggi was preparing to show the world evidence of MBS’s “darker side,” the Times noted.

MBS, meanwhile, thought of the critical journalist as a “dangerous Islamist” rather than a fighter for freedom and democracy, according to the Washington Post, where Khashoggi was a contributing writer.

In the alleged phone call, the crown prince reportedly told his US interlocutors that Khashoggi was part of the Muslim Brotherhood, a transnational Sunni organization that some Western governments, including some in the US, consider a proponent of a radical and violent version of Islam.

Tom Wilson, a terrorism and radicalization specialist at the UK-based Henry Jackson Society think tank, seems to agree with some of MBS’s assessment. He said last week that the truth in the Khashoggi murder is “much more complicated” and that the fervor that followed news of his disappearance “covers up more than it reveals.”

“As an insider to the Saudi regime, Khashoggi had also been close to the former head of the intelligence agency. He was an Islamist, a member of the Muslim Brotherhood, and someone who befriended Osama Bin Laden and had been sympathetic to his Jihad in Afghanistan,” Wilson said.

But the narrative has been unsuccessful so far. Many see it as an attempt to delegitimize Khashoggi to make his murder more palatable in the West. (Washington and the West’s abhorrence of Islamist radicalism is an open secret.)

What the Khashoggi family says

Khashoggi’s family has been quick to respond. The slain journalist’s family issued a statement that vehemently denied he was a member of the Muslim Brotherhood.

The reported phone call came a week into Khashoggi’s mysterious disappearance. At the time, Saudi Arabia denied any wrongdoing in the case. Riyadh said that Khashoggi had left the consulate as soon as his errand had been completed.

International pressure and unrelenting leaks of damning evidence by Turkish news outlets led Riyadh to repeatedly alter its original narrative. Saudi Arabia’s latest position is that Khashoggi was killed in a premeditated operation inside the Saudi consulate.

The kingdom is nonetheless adamant about MBS’s innoncence. It has called the murder “a rogue operation” and has since sacked and arrested dozens of senior officials.

Meanwhile, the post-Kahshoggi backlash continues to paint Riyadh and MBS in a negative light. Many voices have demanded that the journalist’s murderers be brought to account.
Hatice Cengiz, Khashoggi’s Turkish fiancée, maintained in a recent editorial, “The international community must bring my fiancé’s killers to justice.”