Will Morocco’s increasingly bold Africa-oriented diplomatic efforts grant it the continental prominence it so badly seeks?

Rabat – Ozy Media, which earlier this year touted the North African country as “the new emerging African power,” would answer with a resounding “yes. But Ozy is not alone in this thinking.

In August, the World Bank Vice-President for the MENA region called Morocco “a bright spot in a dark region,” an allusion to what Moroccan policymakers call, somewhat boastfully, “Moroccan exceptionalism.”

AMCI and the promise of scientific cooperation

With all the fuss about Morocco’s diplomatic assertiveness in Africa, one element of Morocco’s successful African turn is often overlooked and unmentioned: soft power through scientific and cultural diplomacy.

True, the country’s bold economic ventures in African markets, or even its Malikist cultural activism in Francophone and Muslim sub-Saharan Africa, have borne fruit in targeted parts of the continent. But when it comes to Morocco’s return to the African Union, the Morocco International Cooperation’s (AMCI) initiatives deserve the bulk of the credit, many AMCI scholars told Morocco World News.

While Morocco is known to be the second-highest African investor in Africa, few would know that the North African country is also the leading African provider of scholarships to African students.

As of December 2016, AMCI had agreements with 111 countries, of which 46 are African countries. AMCI’s uniquely assertive presence is most pronounced in Francophone Africa. Every year, AMCI provides thousands of scholarships for university and vocational degrees. Guinea, for example, sends over 100 of the top performers on the national exam to Moroccan institutions annually.

For high-performing students without the means to attend a university in Canada, France, England, or the U.S., Morocco is a liberating prospect. “[It’s] a windfall,” said Youssouf Kourouma, an AMCI scholar, who has recently completed a master’s degree in international law at the University of Hassan II, Mohammedia.

For thousands of low-income sub-Saharan students like Kourouma, “a well-earned Moroccan degree amounts to rosy career prospects.” When graduates of top Moroccan faculties return to their home countries, he explained, they usually land a well-paying job.

Kourouma said that it was all worth it, as the five years he’s spent in Morocco have been enormously formative.

“It has been a total paradigm shift,” he began. “In addition to the traditional academic components that the program entailed, I’ve learned a lot as a person.  The daily travails, the monthly hustle to make ends meet before AMCI’s bimonthly MAD 1500 stipend—all of it has made me more mature and intellectually equipped for my future career,” he said.

Morocco’s involvement and influence expands to other fields like civil society and public administration. In a recent interview with a group of journalists during an AMCI-sponsored cultural event at its headquarter in Rabat, AMCI’s director general, Mohammed Methqal, expressed satisfaction with Morocco’s presence on the continent.

In addition to the thousands of scholarships for young students, “Africa’s future leaders,” the AMCI program has accompanied and “contributed to the training of more than 5,000 public officials from 30 different countries,” Methqal said.

Relying on a combination of human capital promotion, technical assistance, and support for sustainable development projects, AMCI is currently the sharpest weapon in Morocco’s diplomatic arsenal towards the rest of Africa. As Rabat attempts to charm both African markets and popular opinion, it has grown aware of the limits and defects of hard cash diplomacy.

“While economic diplomacy can provide political clout in regional politics, scientific and cultural diplomacy allows you to influence people’s perception of you,” said Kourouma, adding that “AMCI scholarships have played an enormous role in how sub-Saharans view Morocco.”

Aside from the knowledge acquired in Moroccan classrooms, international experiences with Moroccan teachers and classmates changes “many of the stereotypes we entertain about Moroccans and their outlook on the rest of Africa.”

“So, I would say that beyond the usual heavy ‘African investor’ and ‘thriving economy’ headlines about Morocco, the true architect of Morocco’s successful continental turn is the commitment the country has shown for advancing education levels and technical expertise in other African countries,” Kourouma explained.

Even as Morocco left the then Organization of African Unity (now African Union) in 1984, Kourouma elaborated, it maintained some degree of connection to the rest of the continent. AMCI was especially useful at that moment of de jure rupture with the continent.

By keeping the quota of African students as high as possible, even after institutional breakup with the continent, Kourouma argued, AMCI proactively gave Morocco a chance at redemption. “It kept Morocco continuously present in Africa, even as it seemed to think that its future belonged elsewhere.”

In June, Guinea was among the few African nations that chose the U.S.-led “United bid” over Morocco for the 2026 World Cup. Guinean authorities, who said there was a mistake during voting, were adamant about their “uncompromising support for Morocco.”

On Guinean social media, meanwhile, there was a storm of frustration and anger.

Why betray such a devout friend, a country that has always been there for Guinea, opening its doors to Guinean students and citizens even when many countries, including in Africa, ostracized Guinea when the Ebola epidemic erupted?

Questions were asked, names were named, and fingers were pointed. The Guinean Football Federation issued a statement that sounded both apologetic and regretful, though they maintained their position that there had been a mistake.

“My stay in Morocco has helped me to reinvent myself, broaden my prospects, and expand my social and intellectual horizons,” Elhadj Ibrahima Barry, a first-year Guinean student at the elite Mohammedia School of Engineering, told Morocco World News.

Barry ranked third in Guinea’s Baccalaureate, the national university entrance exam, and he was given a scholarship to elite classes prépas(higher school preparatory classes) in Fez. There, he spent two years intensely studying advanced mathematics and physics, in preparation for a place at one of the top engineering schools in Morocco.

Reminiscing on his prépasyears, he said: “The teaching quality was incredible. I would definitely recommend Morocco as [study] destination.”

Barry beams with smiles and laudatory remarks when he speaks of his prépas atmosphere, especially his “genius Moroccan classmates.”

“There was so much sociability and hospitality,” he said. “Beyond the easy stereotypes I had been exposed to prior to coming here, I’ve discovered a predominantly welcoming and warm atmosphere at school.”

“I am happy to have come here,” says Boubacar, an economics student in Tangiers. Boubacar, who is even more enthusiastic than Barry, seems more than happy. His elated tone speaks more of love than happiness; he has fallen in love with Morocco, at least that is what one gets from his incessant praise of the “education Morocco has given me.”

“Morocco has one of the best education systems in the world,” he offered. “So being at a Moroccan school has been largely good for my intellectual and personal growth. Morocco has given me hope, and I am now confident in fighting for my dreams. Thank you so much, Morocco!”

While AMCI’s achievements between 1986 and 2016 can be lauded, the true turning point came with King Mohammed VI’s sincere interest in African issues. Starting in 1999, Mohammed VI crisscrossed the continent, as he tried—and many times successfully—to sell Morocco’s vision of an “Africa that believes in its potential.” 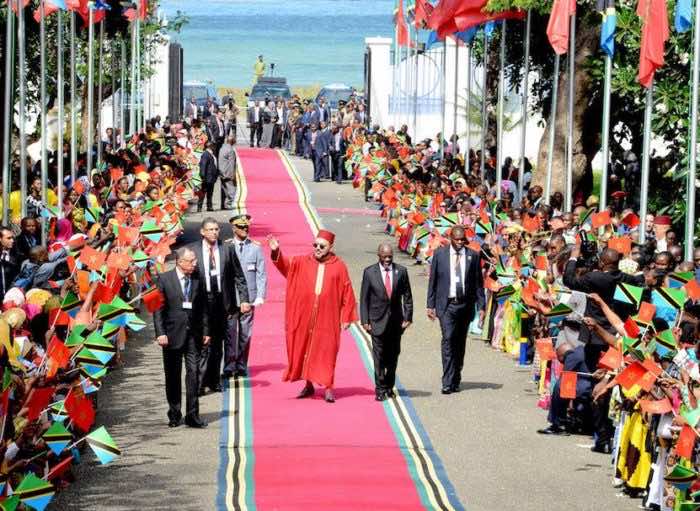 According to the latest AMCI figures, the King’s personal commitment to Africa has led to a revamping of Morocco’s Africa-focused programs. In 2017 to 2018 alone, Morocco granted over 5,000 scholarships to African students, almost a third of the total number of African students that Morocco hosted up to 2016-2017.

The same period also marked a stupendous increase of African students receiving the AMCI stipend, from 6,500 students in 2017 to over 11,000 to this day, Methqal explained.

He noted that “the royal vision for prioritizing South-South and intra-African initiatives” has been a determining factor in doubling Morocco’s engagement for sustainable development in the continent.

Others see the King’s “personal engagement” through a combative lens. It has been, they argue, the coup de forcein Morocco’s silent rejoinder to its African detractors.

“Whenever anyone questions Morocco’s commitment to Africa or defies Morocco about storming out of the continental union, the kingdom can calmly present AMCI’s achievements and King Mohammed VI’s personal investment in sub-Saharan Africa. It shows that they never really left Africa,” said a Malian doctoral student who requested anonymity.

He added, referring to the sea change that Mohammed VI’s Africa-focused rhetoric has brought to Moroccan society: “People who feared me in 2009, or sometimes threatened me, now approach me with smiles. They even call me ‘my African brother.’ To say that that is progress is an understatement,”