King Mohammed VI has called for Morocco to reclaim the sacrificial and patriotic spirit that spurred Moroccans to protest the Spanish occupation of Western Sahara. 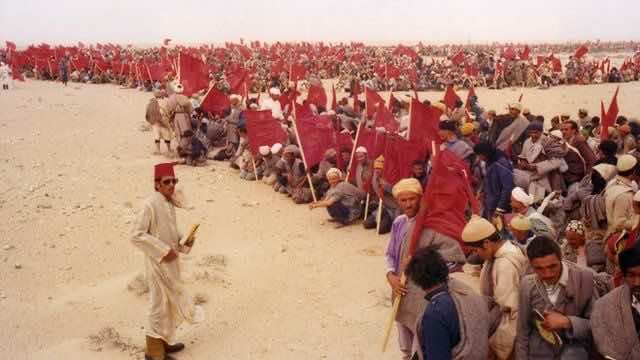 Rabat – King Mohammed VI, who gave a speech Tuesday as Moroccans celebrated the 43rd anniversary of the Green March, called on Moroccans to espouse the same patriotism that, 43 years ago, paved the way for a “peaceful and gradual recovery of southern provinces.”

Citing the key moments of the peaceful march, King Mohammed VI delivered a rallying cry for all Moroccans despite internal challenges: When it comes to the sacredness and the indivisibility of Morocco’s territorial integrity, Moroccans should be firm and unyielding.

On November 6, 1975, over 300,000 unarmed Moroccans rallied to cross into Western Sahara. The peaceful popular uprising, which came to be known as the Green March, was a show of their commitment to Morocco’s sovereignty over the then Spanish-occupied territories.

However, since the creation of the separatist Polisario Front’s self-proclaimed Sahrawi Arab Democratic Republic (SADR) in Western Sahara, Morocco’s legitimacy claims over the region has been subject to contention and acrimonious debates in the international community.

United around Algeria and the Polisario Front, a number of countries have strenuously denied Morocco’s legitimacy rights over Western Sahara. They have called the kingdom an “occupier” and a “colonizer.”

According to King Mohammed VI, Morocco’s challenge is to reclaim the “Moroccanness” of the disputed territory.

To do so, the King argued, Moroccans—especially the diplomats and officials tasked with convincing the international community of Morocco’s position—should equip themselves with “clarity” with regards to history and “far-sightedness” regarding present and future challenges.

“Today, we are linking the past with the present, and we continue to safeguard the territorial integrity of our country with the same clarity, ambition, responsibility and committed action, both domestically and at the United Nations….

“This clarity is also shown by the firm, resolute manner in which we have been tackling all transgressions—whatever their origin—aimed at undermining Morocco’s legitimate rights or departing from the frame of reference agreed for the settlement process.”

On October 31, the UN Security Council adopted Resolution 2440. The document called for a six-month extension of MINURSO’s mandate and the continuation of efforts to secure a politically negotiated, “lasting,” and “fair” settlement. It also noted that parties should come to negotiations with no agenda or preconditions.

Perhaps aware that his rhetoric of uncompromising attachment to “the Moroccanness of Western Sahara” may come across in some circles as a veiled heads-up on Morocco’s demands, King Mohammed VI reiterated Morocco’s commitment to the UN-led political process.

Analysts have suggested that Resolution 2440 marks a substantial diplomatic gain for Morocco. Not only did the resolution encourage Algeria to work with the UN on the political process, it also seems to have given a nod—however tacit—to Morocco’s 2007 Autonomy Plan.

King Mohammed VI, whose speech evinced satisfaction with prospects of diplomatic overtures under the UN’s watch, asserted that past diplomatic failures must inform the recently gained momentum to avoid another diplomatic deadlock in the Sahara dispute.

For its part, Morocco will leave “no stone unturned” to ensure “complete” territorial integrity.

Like their compatriots in 1975, Moroccans of all generations should be ready to “make whatever sacrifices are needed to defend the homeland,” the King said. He added that there is no better proof of loyalty to the nation than the perpetuation of the Green March spirit: “unity, security and stability.”