The AfDB bank has approved a €117 million loan to finance investment into making drinking water available in Morocco.

The project “aims to secure access to drinking water through new investments in treatment processes and drinking water supply networks” in Morocco, AfDB wrote in a statement on November 6.

The board of directors of the African Development Bank Group (AfDB) said it approved the loan on Monday, November 5.

The project will target 2.5 million people in Guercif in the northeast, Zagora in the east, Al Hoceima in the north, Tangier, and Beni Mellal in central Morocco.

“Guaranteeing access for all to high-quality drinking water is the prerequisite for any form of sustainable development,” El Azizi said.

The program, which plans to ensure sustainable access to drinking water, meets two of the bank’s five highest priorities: “Improve the quality of life for the people of Africa” and “Industrialize Africa.”

For Leila Farah Mokaddem, the bank’s Morocco country manager, the project “will contribute to further improving the quality of life of millions of Moroccans.”

“Taken together with our investments in education, agriculture and energy, it will facilitate the emergence of new poles of development,” Mokaddem added.

The project, according to AfDB, is in line with the objectives of the National Emergency Water Sector program and relevant sustainable development goals. The project is also aligned with the priorities set in the 2016-2020 investment plan of Morocco’s National Electricity and Drinking Water Agency (ONEE).

In June, the head of ONEE in the Fez region, Mohammed Berkia, said that office is adopting projects to improve the potable water supply in Al Hoceima through 2035.

Berkia said the projects would cost an estimated MAD 714 million. The government has budgeted MAD 900 million for the project, which will launch by the end of the year.

The King appointed a commission led by Head of Government Saad Eddine El Othmani to find appropriate solutions to the problem.

The monarch called on the commission to establish desalination plants and to ensure sustainable water in agricultural fields.

In March 15, El Othmani announced that the government would introduce a national water plan through 2050 to solve water shortages in Morocco.

According to the AfDB, the fifty-year partnership between Morocco and the bank includes more than 160 projects and programs with a total fund of more than $10 billion.

More than 80 percent of the funding has been devoted to basic infrastructure in energy, water, transport, agriculture, and social development. 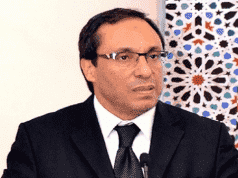