UN Secretary-General Antonio Guterres has agreed with King Mohammed VI’s proposal for a more “frank and direct dialogue” between Morocco and Algeria. 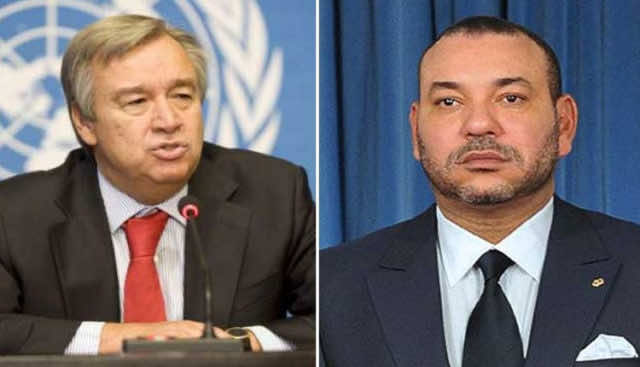 Dujarric made his remarks at a press briefing on Wednesday in response to a journalist’s question about King Mohammed VI’s proposal.

On Tuesday, King Mohammed VI delivered a speech on the 43rd anniversary of the Green March.

In his speech, The King said that Morocco is open to “any proposals and initiatives from Algeria” to re-establish bilateral ties. He added that the bilateral ties between Algeria and Morocco are “not normal” and “much less than acceptable.”

The King also called for a political mechanism “to analyze all pending issues in good faith and in a very frank, objective and honest way, using an open-ended agenda, without conditions or exceptions.”

“I should like to stress that Morocco is willing to consider the proposals or initiatives Algeria may want to offer in this regard so as to break the stalemate in the relations between the two neighbors and sister nations,” said the King.

Dujarric also said that Guterres “welcomes” the support of King Mohammed VI for the Secretary-General’s Personal Envoy Horst Kohler, who invited all parties for talks in Geneva December 5-6.

The UN chief also commended the “parties and neighbours for responding positively to the invitation of Mr. Kohler for an initial roundtable” to discuss the Western Sahara conflict.

According to Dujarric, Guterres also hoped that “this initial roundtable will be the beginning of a process that will lead to a solution of this long-standing conflict.”

The roundtable was also highly welcomed by Resolution 2440 adopted by the Security Council on October 31.

The resolution has for the first time mentioned Algeria as a party that should contribute and “work constructively” with Kohler to ensure the success of the political process.