Approximately 40,000 Moroccan soldiers fought for freedom and peace on the Allied side during World War I. 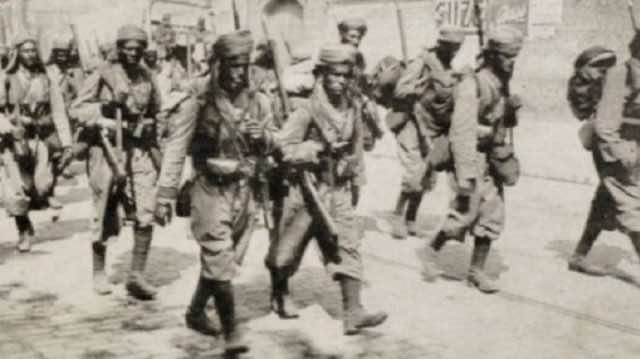 Rabat – In an interview with AFP, Lyautey high school history teacher Jean-Pierre Riera spoke about the bravery of Moroccan soldiers during the first world war.

He said that Moroccan soldiers represented seven percent of the colonial troops involved alongside France.

The professor mentioned in his interview two types of Moroccan soldiers: skirmishers and the regiments.

Riera said in his interview with AFP, “There was no military service in Morocco at the time, so these [were] voluntary commitments at first.”

He said that the volunteers were mostly young men from the countryside.

The expert said that the contributors did not know what to expect like all other soldiers participating in the war.

The historian said that Moroccans had participated in all the major battles of the first World War. Moroccans were involved as early as the Race to the Sea battle, fought between 17 and October 19, 1914.

The French expert said that Moroccan soldiers also participated in two major battles in 1915: the Artois and Champagne battles.

They also participated in the the battle of Verdun in 1916 and the famous Battle of the Aisne in 1917.

In 1918, Moroccan skirmishers helped to “limit the damage when the Germans [began] to advance towards Paris.” Riera then said that Moroccan troops then participated in the battles that liberated the territory, which was occupied by the Germans.

The interview came in conjunction with the 100th anniversary of the end of World War I on November 11, 2918. World leaders, including King Mohammed VI, gathered in Paris Sunday to mark the commemoration.

The King was accompanied by Crown Prince Moulay El Hassan.

The event aimed to pay tribute to those who fought in the Great War.

On Tuesday, Rabat will host a study day under the theme “Moroccan Soldiers During the First World War.”

The event will be hosted in coordination between Morocco’s Ministry of Foreign Affairs and the French embassy in Rabat. It aims to pay homage to the commitment of Moroccan soldiers alongside France.